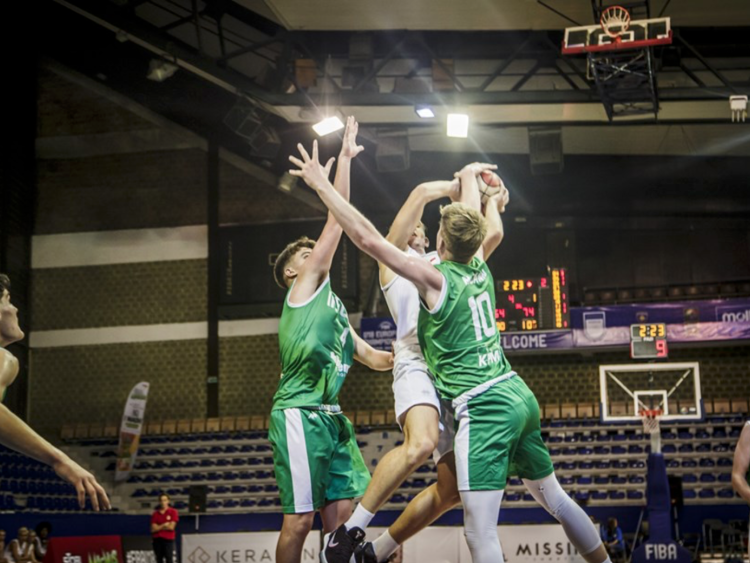 Action from Ireland's win over Monaco

A tough home crowd atmosphere awaits the Ireland Under 18 men’s basketball team on Saturday (July 28th) evening, as they go head-to-head with tournament hosts, Kosovo, in the semi-final of the FIBA Under 18 European Championship Division C.

The boys in green stormed their way into the semi-final after topping Group A unbeaten with wins over Malta, Armenia, Monaco and Moldova during the week. Kosovo meanwhile came second in Group B after losing out by just one point to Group A toppers Cyprus, while winning out earlier in the week over San Marino and Gibraltar.

Limerick’s Nathan Moore is in fourth position in the overall rankings for most three-point shots made, following on from a superb shooting game against Moldova that saw him finish with eight three-pointers.

Looking ahead to tomorrow’s showdown, Ireland head coach Paul Kelleher stated: “Going in against the host nation is always a tough ask. The crowd so far have helped Kosovo pull through in many tough situations, but we have been very composed in our preparation and in the tournament so far.

“We know we have done a lot of good things well, but we also know that we have certain things that we need to improve upon, and hopefully tomorrow, all of that will come together and we will come out on top.”

Following their unbeaten run through the group stages, the Irish squad are featuring prominently on the tournament stats. Galway's Paul Kelly is leading the tournament stats for assists, placing number one in the championships, while Neptune's David Murray has been one of the team’s top performers throughout their games so far, currently in fourth place in the overall tournament’s top scorers - averaging 22.9 points per game - and also in the top five for rebounds.