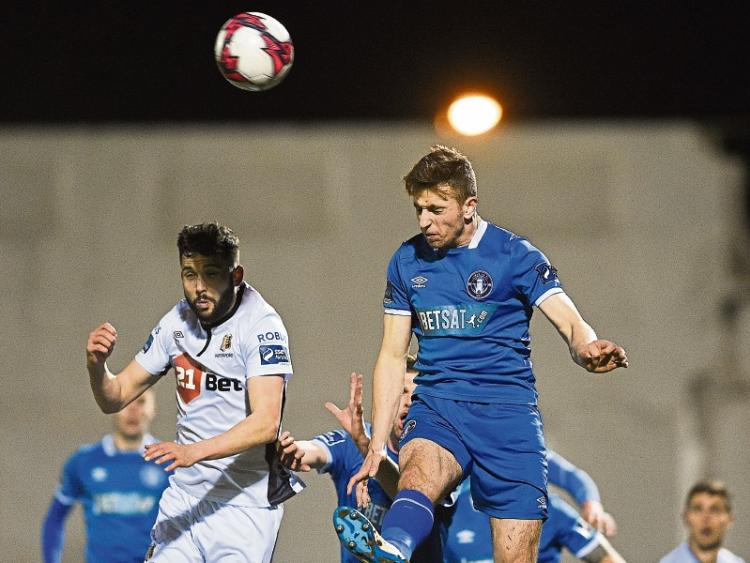 Connor Ellis, right, pictured here in action against Waterford Utd, scored Limerick FCs goal in their 2-1 defeat to Derry City at the Brandywell on Friday night

LIMERICK FC’s bid to secure a first league victory over Derry City in almost four years ended in a frustrating 2-1 defeat in their SSE Airtricity League Premier Division clash at the Brandywell on Friday night.

Second-from-bottom Limerick had been hoping to record back-to-back wins in the Premier Division for the first time in 15 months. However, despite taking the lead in the 35th minute through Connor Ellis, his first goal for the club,

Limerick were unable to retain their advantage and ultimately slipped to their third defeat of the season against the Candystripes, despite turning in a battling display.

Visitors Limerick, looking to build on their crucial victory over basement side Bray Wanderers seven days earlier, almost made the perfect start inside a minutes, only for Ellis’ effort to rebound off an upright.

Relegation-threatened Limerick had fallen apart on their previous trip to the Brandywell venue this season in March, conceding four times in 11 second-half minutes as they went down 5-0.

However, the Shannonsiders remained hugely competitive throughout their latest visit to Derry.

Keeper Brady was most recently with Longford Town, while Murphy joined the Blues after spending time at Cobh Ramblers most recently.

Limerick survived a scare in the fifth minute when Aaron McEneff delivered an early corner for Derry which was met by Aaron Splaine whose effort was cleared off the line.

Ellis fired the Shannonsiders in front in the 35th minute, only for Derry to hit back almost immediately when Aaron Splaine equalised to leave the sides deadlocked 1-1 at half-time.

Limerick made a disastrous start to the second half when, after just 30 seconds, Derry took the lead as McEneff crossed for Roy to finish.

Murphy was introduced as a 73rd minute substitute to make his debut for the Blues.

Limerick could agonisingly close to grabbing an equaliser in the 90th minute, but Derry keeper Ger Doherty produced a terrific save to deny Barry Maguire.

Manager Tommy Barrett made two changes to the team that defeated Bray Wanderers seven days earlier as the departed Brendan Clarke and unavailable Shaun Kelly are replaced by Tommy Holland and Killian Brouder, the latter returning after concussion.

Seventeen-year-old defender Tomás O'Connor was also included on the substitutes’ bench following his promotion to the first-team squad.

Basement side Bray Wanderers host Sligo Rovers in a crucial relegation fixture at the Carlisle Grounds on Sunday, 4pm.

Next up for Limerick FC is an away date with St Patrick’s Athletic at Richmond Park on Friday, July 20 at 8pm.