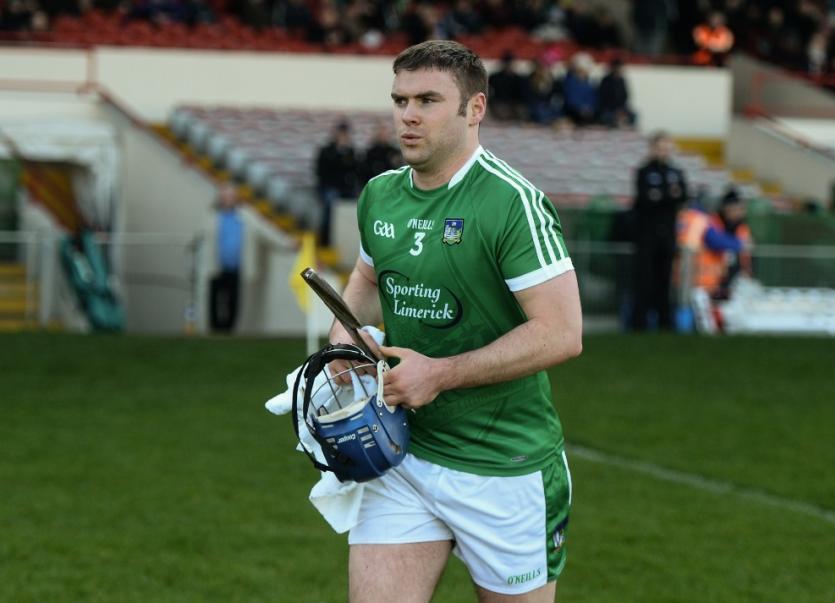 Richie McCarthy makes his first start of the 2018 championship

THERE are three changes to the Limerick senior hurling team to play Carlow in the All Ireland SHC preliminary quarter final.

There is a first ever championship start for William O'Donoghue in midfield, while Richie McCarthy makes his first start of this year's championship at full back.

In the third change from the side that lost to Clare last time out, Aaron Gillane returns in the full forward line.

Richie McCarthy didn't feature in the opening three games of the Munster SHC but was introduced as a half time substitute in the loss to Clare. Saturday in Carlow will be just his third start of the year - he started Allianz Hurling League games in Antrim and Galway.

Limerick's last competitive senior hurling fixture in Dr Cullen Park was a 2011 Allianz League game - Richie McCarthy is the only survivor from what was his debut season, when he was in the forwards and the team's free-taker.

William O'Donoghue missed last year's championship due to injury and the Allianz League campaign due to Na Piarsaigh's All Ireland club run. He was used as a substitute throughout the Munster SHC but will start for the first time in the championship against Colm Bonnar's Leinster side.

Dropping to the bench are Sean Finn, Darragh O'Donovan and Shane Dowling. Finn and O'Donovan both carried injuries out of Ennis but are listed among the substitutes.

Also listed among the subs for the first time in this championship are Peter Casey and Barry O'Connell.

Paul Browne (injured) and Tom Condon (suspended) weren't available for selection. Others not making the matchday panel are Barry Murphy and David Dempsey.

Fourteen of the Limerick team had remained unchanged throughout the Munster Championship.

Limerick used 25 different players over the course of the four group games in the Munster SHC. Seventeen of those were handed starting places.

Limerick scored 3-92 in the Munster SHC with 13 different scorers - Tom Morrissey was the top scorer from play with 0-12. Cian Lynch hit 0-9, while Seamus Flanagan had a return of 0-8. The three goals were scored by Gearoid Hegarty, Graeme Mulcahy and Barry Murphy.

Saturday's winner in Dr Cullen Park will advance to a July 15 All Ireland SHC quarter final against the losing side from Sunday's Thurles Leinster SHC final replay between Galway and Kilkenny.

In the other side of the draw, Wexford play Westmeath this Saturday (7pm) with the winner to play Clare in a a July 15 All Ireland SHC quarter final.

The All Ireland SHC semi finals are set for Croke Park on Saturday and Sunday, July 28/29.