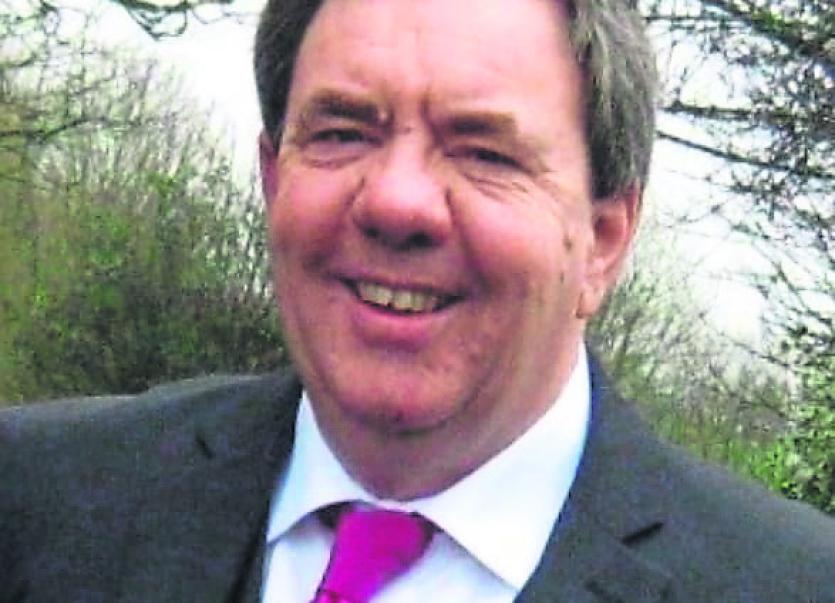 For a brief moment it looked like they were preparing for a game, with soaring temperatures bearing down on them they gathered at the cross roads around Allison Murphy.

One by one she handed men and women, of various ages, a jersey. It could have been a scene from another time. The rural village of Kilteely was about to stand still in honour of a man that had left no stone unturned to help the GAA and his community.

The untimely death of Robert O’Dea shocked his locality but also the entire GAA community around Limerick. He was known in every parish in Limerick through the GAA.

As the hearse turned the corner I could see men that I first saw playing forty years ago in the guard of honour, Mike O’Loughlin and Georgie Murphy were men that wore the Kilteely jersey with pride. They had come the back road by the hurling field, a final stop at a place that meant so much to Robert O’Dea.

The GAA was a central part in the life of Robert, that tradition was fostered by his late father Patrick or ‘Pake’ as he was best known. Pride of place and identity were core values and Robert carried the torch lit by his father. In the shadow of Kilteely hill they moved in silence.

Robert O’Dea was born into a household where playing your part was important. Hurling and football were the heartbeat of life in Kilteely Dromkeen. In another era they would stand at the creamery in Cloverfield long after the milk intake to discuss hurling. It was a way of life and this was the backdrop that produced leaders like Robert O’Dea. From an early age he played the games but he always showed a willingness to get involved, to help his club, team and community to be better.

For more than forty years Robert played his part, his contribution was massive and like all small places at times undervalued. He might not have known it but he was someone that people looked up to in Kilteely. He had only one agenda after family and that was the GAA in Kilteely. It was the pulse and for so long he set the pace.

I have said many times before that the GAA knows how to honour its members. Few do it better than them. Robert O’Dea’s funeral was a coming together of people. On many occasions in the past Robert would have led from the front but his untimely death now saw others lead for him.

Huge crowds gathered both days. People had high regard for him and the O’Dea family and from all parts of the country they came in honour of a man that had departed with his agenda still not completed. At every corner stories were shared, memories rekindled and cherished about Robert. The light filled church with its beautiful domed ceiling in sky blue saw the reflection of the stain glass windows amongst the moulded grids. Fr. Joe Tynan had met Robert on the evening before his passing and it was clear he held him in such high regard, “We are lost for words, he was a key figure in our community life and his loss will be felt greatly by his family and the many organisations that he helped.”

It takes someone in every parish to show the way and Robert O’Dea was such a person. He saw how others did it before him. His club Kilteely produced many great people that kept the club going in difficult times, people like Dan Murphy, Mary Jo Bolger, Ted O’Dea, Jimmy Breen, Pake O’Dea, Pakie Redfern and Philip Purcell would have influenced Robert and he carried the tradition of the past into the future.

As a young lad I knew his father Pake, his love of the GAA was ever present. He was a gifted actor and along with Pat O’Dea (The Master) he cultivated a tradition that saw many All Ireland Scor titles come to Kilteely Dromkeen and Limerick.

Robert played both hurling and football but it was as a selector, manager and coach that he reaped most rewards. He had a way of getting people to respond to him. One of his greatest achievements was when Kilteely won the County Junior Football title in 1989. It was the first and only time they won the title and it would not have been possible without the massive efforts of Robert O’Dea.

His knowledge of the GAA and particularly Limerick was immense and it was little surprise that he was asked to be a selector with Limerick teams both in hurling and football. He won the respect of players and when others held the view that Limerick footballers were going nowhere it didn’t stop Robert making a contribution.

It was fitting that current Limerick manager John Kiely, who along with Robert was a selector with the Limerick Intermediate hurling team in 2011, took part in the funeral mass.

Few followed Limerick as much as Robert O’Dea, it didn’t matter where the games were. His love of Limerick and his native place was really important to him and he was delighted to see Limerick going well this year under his friend John Kiely. The last time I saw Robert was at the Limerick versus Waterford game in the Gaelic Grounds. He had great hope for this team and for the future of Limerick GAA.

The Chairman of the Limerick County Board John Cregan was present in Kilteely and he knew the contribution Robert O’Dea made both at club and county, “The last few weeks have been difficult for GAA people, we have lost many that have played key roles in their communities. Robert O’Dea was a very inoffensive man that always tried to help. He gave so much to his club and made a fine contribution to Limerick GAA. The likes of Robert were corner stones in GAA and people had great admiration for him. His loss will be really felt locally because his club was always his priority.”

Through his long involvement with the GAA Robert O’Dea contributed at every level. He held nearly every position at both juvenile and adult level in this club. He served on the East Board and also various committees at County Board level. He was a referee and like most things he did he used common sense to get the best outcomes. From my own point of view I knew Robert all my life, I saw first hand what his club meant to him.

In our life if we are lucky if we will leave footprints for others to follow but in the case of Robert O’Dea he left a road map.

At the end of his well delivered and moving contribution about Robert O’Dea Fr. Joe Tynan walked from the alter to the coffin. With his left hand he took up Roberts’s whistle and blew it for the last time. It was a chilling moment.