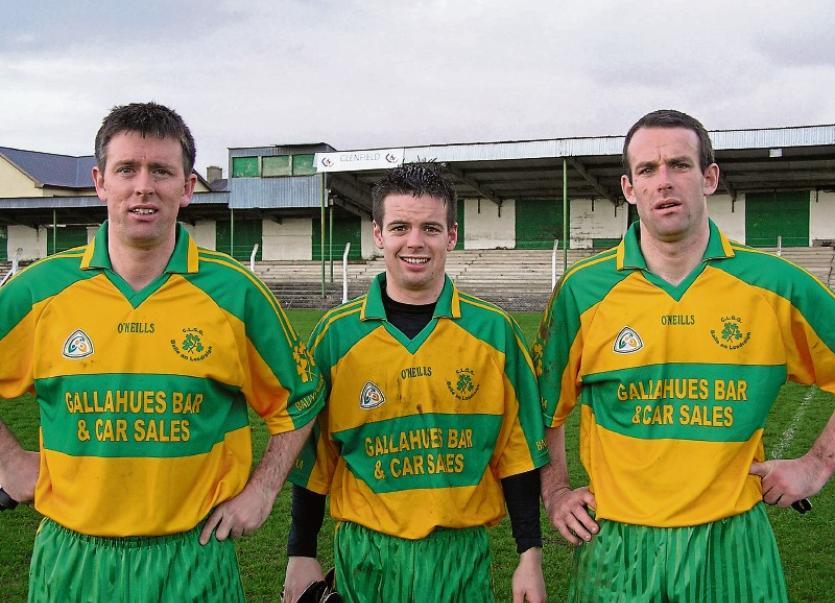 Danny, Jimmy Barry and Johnny Murphy won a Limerick SFC title together in 2007

SATURDAY is the first ever senior hurling championship meeting of Limerick and Carlow.

To the average Limerick hurling supporter, Netwatch Dr Cullen Park will be a trip into the unknown but not so for the Murphys of Glenroe-Ballylanders GAA clubs.

In the 1960s Murphy brothers Seamus and Mike moved from Carlow to Glenroe. The brothers were to play an integral part in the fortunes of the GAA in south Limerick for many a year to follow. In 1974 they won a Limerick JAHC medal with the side in green and black hoops.

Mike later returned to Carlow but Seamus Murphy remained and until his 2013 death was instrumental as an official and mentor with Glenroe, Ballylanders, the South Divisional Board and varying inter-county Limerick teams.

Seamus Murphy’s three sons made their mark in Limerick.

The eldest Danny won an 1998 All Ireland IHC title with Limerick, alongside current Limerick hurling manager John Kiely. In 2007 Danny and his brother Johnny played in the Munster IHC in Thurles when Limerick lost to Waterford. Johnny Murphy made his mark more in the football scene – an integral part of the county side under Liam Kearns. The youngest brother Jimmy Barry also wore the green of Limerick and in 2014 captained Ballylanders to the Limerick SHC title.

While there may be divided loyalties for the Glenroe Murphy’s on Saturday Johnny won’t be present. Now an accomplished inter-county referee, Johnny Murphy is in his first year on the 10-strong refereeing panel for SHC games. He refereed two Leinster SHC games – Galway v Offaly and Wexford v Galway.

At the same time as Carlow entertain Limerick this Saturday, Murphy will be linesman in Mullingar when Westmeath play Wexford in the other All Ireland SHC preliminary quarter final.

In Carlow, his six cousins will be wearing the red, yellow and green against Limerick.

Former Glenroe hurler Mike Murphy has two sons on the Carlow panel – top scorer Denis and Jack among the subs.

Another cousin is joint-captain Richard Coady. The centre back is joined in the team by his brother Paul at centre forward.

Wing back is another cousin Kevin McDonald. His father John has been vital to the rise of Carlow hurling, as U-21 manager and senior selector.

All five are from the Mount Leinster Rangers club – who broke the mould for Carlow hurling when winning the 2013 Leinster club SHC title.

Completing the list of six cousins is midfielder Jack Kavanagh from the St Mullins’ club. His brother Martin, who has starred for the DJ Carey managed IT Carlow in recent Fitzgibbon Cups, is absent after heading to San Francisco for the Summer. He was top scorer with 4-31 as they won the Allianz Hurling League Division 2A title in March.