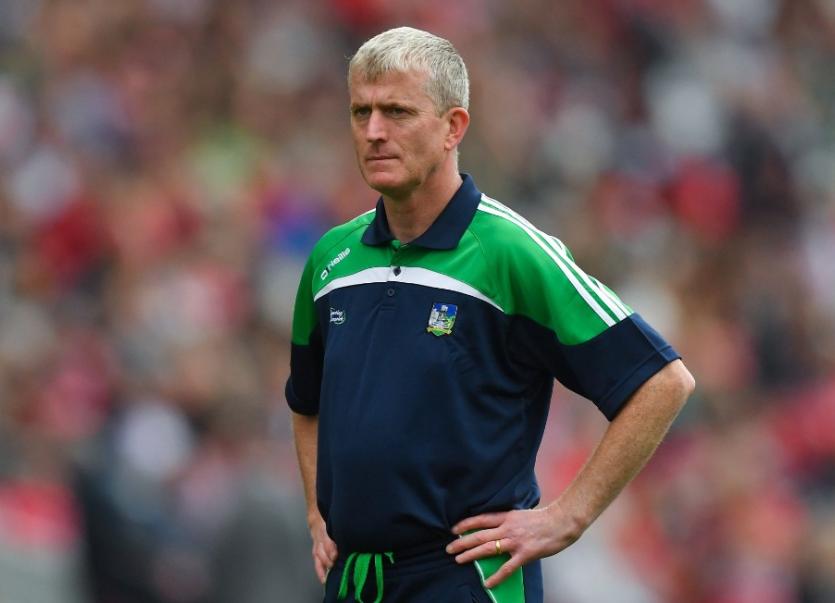 The Limerick hurling manager will be hoping to move from the stands to the sideline on his next visit to GAA Headquarters but insists there is no talk of a potential quarter with Galway or Kilkenny ahead of Saturday’s journey to Netwatch Dr Cullen Park.

“Its a game we have to take extremely seriously and make sure that we don’t end up creating a problem for ourselves. Its hugely important that we get a really strong performance on Saturday evening,” stressed John Kiely of the clash.

Carlow booked their spot in the All Ireland SHC series with a 2-26 to 1-24 McDonagh Cup final win over Westmeath. That was a repeat of the Allianz League Division 2A final from back in March, which secured them promotion to Division 1B next season.

The men from the banks of the river Barrow are managed for the last two years by former Tipperary All Ireland SHC winner Colm Bonnar. A former selector with his native county and Waterford, the experienced Cashel man is also a former manager of Wexford.

“They were really impressive and played really well. They are well coached and well organised and all their forwards scored and scored handsomely and they created an awful lot of shooting chances – they have two very accurate inside forwards, who scored two goals. They are also very strong on their own puckout,” outlined Kiely.

And, the men in red, green and yellow have home advantage.

“Home advantage is always an advantage - you know your home ground and we have never played down there before so for us this is going to be a new outing so it is an advantage but it is up to us to make sure we play well enough and perform well enough to overcome that advantage.”

The prize on offer in Carlow is a first Limerick appearance in an All Ireland SHC quarter final since 2014. Nine of that team which beat Wexford remain but the majority of the 36-man Limerick panel haven’t seen involved in the later stages of the All Ireland Championship.

“We are better equipped as a group and as a panel the players are better equipped to have a cut. Two years work is showing now but at the end of the day, we have to be absolutely ready for the challenge that comes on Saturday in Carlow’s home pitch in Dr Cullen Park.”

The Limerick manager insisted that focus isn't an issue for the 1/66 favourites.

“It’s a challenge every day that you go out to make sure that you have the right approach and mentality - we have never being found wanting this year in any of our games right from the very start when we played the Munster League. The attitude has always been right and that’s down to the players and their own attitude - it’s not necessarily management. The players are very hard-working and ambitious and very good at managing themselves going into matches to make sure they are in the right frame of mind,” he outlined.

“It was disappointed not to make it to the Munster final obviously but attention very quickly switched away from that once the result was decided and we were not progressing in that competition. The fact that we had qualified for the All Ireland series meant we had to turn our focus very quickly onto that so that is where our focus has been.”

The manager refused to accept fatigue as a reason for the below par Ennis display.

“Ultimately the fact is that we just didn’t play well on the day - we didn’t use the ball well and we didn’t apply pressure in the areas that we would have liked to have. It was a poor performance in our part - it’s parked, its done and dusted and we have taken the learnings and moved on and preparing for the next step and the future,” he said.

“We gave the lads a week off to take a break after the round robin series and we are back training since early last week and training has gone really well. They needed time off - we had been together for nearly eight weeks at that stage and we were due a break. Obviously had we qualified we would have pushed on again but the opportunity was there with three weeks to take the first one off.”

2018 has already brought league promotion and progress out of the Munster SHC but the Kiely said the coming weeks were the “real business end of the year”.

“We have made use of all the different phases of the year so far. We performed well in all of the phases and gotten a certain satisfaction from some of the achievements from within those phases but this is the real business end of the year and this phase is hugely important for us as a group and we are very committed to making sure we maximise our output from this phase,” said the Limerick hurling manager.