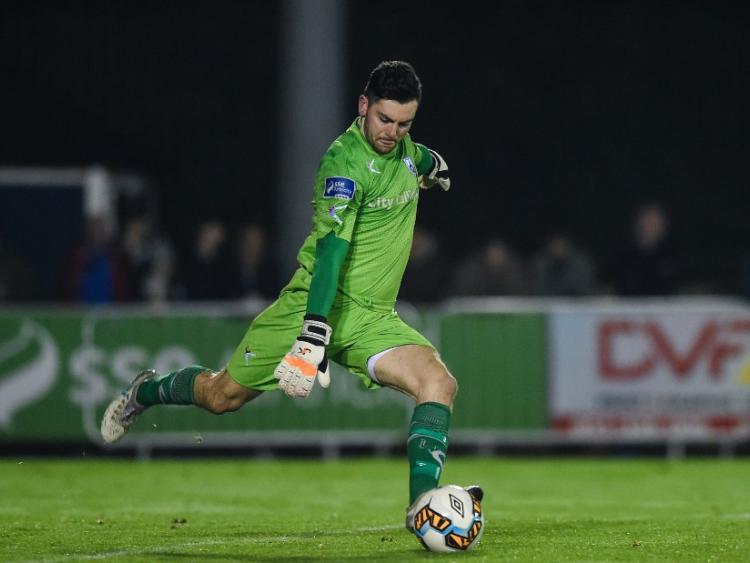 LIMERICK FC ARE set to replace Brendan Clarke with Killaloe native Jack Brady in the coming weeks following the 32-year-old’s departure on Friday.

Clarke signed his mutual termination with the club on Friday night after their 2-1 win over fellow strugglers Bray Wanderers and Blues boss Tommy Barrett has wasted no time in identifying a replacement for the veteran stopper.
Brady is ten years Clarke’s junior, but has relative experience in the league for his age. Despite being from Tipperary, Brady was part of the underage setup at Shelbourne.

He played against Limerick in the quarter-final of the U19 cup for Shelbourne in Hogan Park, eventually losing out on penalties to a Blues side led by soon-to-be boss Tommy Barrett and Tommy Holland, with whom he’ll compete for the starting berth.
Brady advanced through the underage setup in 2014 before making his first appearance in a senior Shels squad in May 2014. He made his senior debut against Cobh Ramblers in the final game of the 2015 season.

After pulling off a number of impressive saves in Limerick’s dramatic 4-3 win over Shels in Tolka Park during the 2016 First Division campaign, Brady then signed for Longford Town at the beginning of the 2017 season.
Tommy Barrett has lost Brendan Clarke, Conor Clifford, Daniel Kearns, Mark O’Sullivan and Tony Whitehead thus far, but with the exception of Darren Dennehy, everyone else seems likely to stay. That’s good news for Blues fans but it also restricts Barrett’s power to restructure his budget.

Cobh Ramblers’ Darren Murphy is also set to be announced in the coming days as the Blues look to consolidate their squad for the remainder of the season.
Murphy was part of Cork City’s golden era for their U19s – winning countless trophies at Turner’s Cross for the Rebel Army, before signing for Ramblers in 2015.
Further additions may be limited, but it’s understood that an additional centre half coming in would depend on Darren Dennehy’s decision.