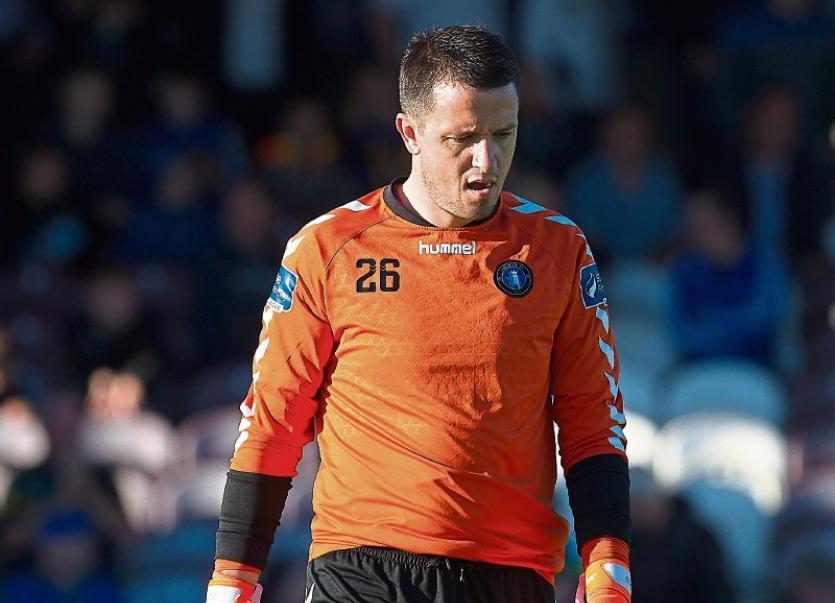 Goalkeeper Brendan Clarke who has confirmed his departure from Limerick FC

EXPERIENCED goalkeeper Brendan Clarke has confirmed his departure from Limerick FC in an emotional post on social media.

Clarke has become the fifth player to depart Limerick in recent days with the start of the League of Ireland’s summer transfer window.

The keeper signed off on his time with the Blues by turning in an impressive display in their crucial 2-1 victory over Bray Wanderers in the SSE Airtricity League Premier Division at the Markets Field on Friday night.

Thirty two-year-old Clarke joined Limerick from St Pat’s at the start of the 2017 season.

Clarke said it had been a huge pleasure to represent Limerick FC and the city for the past 18 months.

In a post of social media, Clarke said: “It is sad to be having to do this before the end of my contract, but I can’t explain how happy I am to finish off my stay with the club with a win in such an important game in the context of the season last (Friday) night.

“It was a huge pleasure to represent the club and and the city for the last season and a half and it was an even bigger honour to captain the club and lead the boys on the pitch when Duggan (Shane Duggan) was unavailable.

“Huge thanks to all the supporters who have been phenomenal to me during my stay, not just when I was on the pitch, but when I was out and about in the city too.

“Sadly, there’s been a big drop in attendances this season, so I would encourage everyone who goes to the Markets Field on a Friday night to drag a mate along.

“Results haven’t been great this season, but that is not for a lack of honesty, effort and endeavour from the boys on the pitch.

“Put the personal opinions aside for the two hours and give everything you have to supporting the boys. They’re the ones representing you and the city and they’ll leave everything out there for you, win, lose or draw.

“Players know it is hard for people to part with their hard earned cash but the support is massively appreciated.

“Obviously, thanks to the four managers, the coaches and all the players I’ve played alongside at the club. Players always say that their dressing rooms are great, but at Limerick they really were. I leave wishing Tommy and the boys nothing but the best of luck for the rest of the season.

“Lastly, the biggest of thanks to Eddie Hickey, Mr Limerick FC. It was him who initiated contact with me and brought me down and sold me the club and the city. It was an easy decision after meeting up with Ed. A top goalkeeper coach and even better person. The feather on the pitch will stay with me for the rest of my career.

“”There has been highs and lows, but it was never boring.”