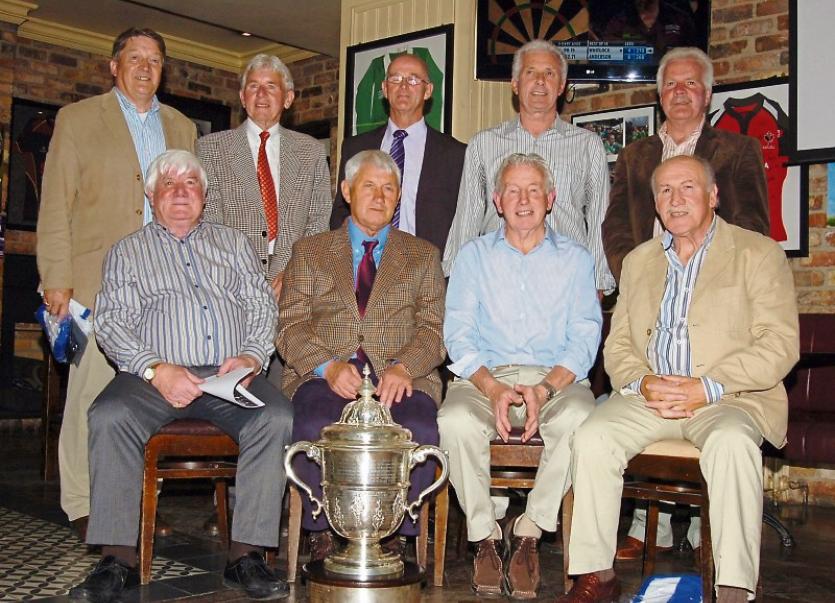 The late Dave Barrett, front, second from left, with members of Limerick's 1971 FAI Cup winning side at a 40th reunion of that historic success in 2011

TRIBUTES have been flooding in for former Limerick FAI Cup winning hero Dave Barrett who has passed away in his native Southampton.

Forever remembered for his opening goal of the FAI Cup final replay against Drogheda United in Dalymount Park in 1971, when Limerick AFC lifted the trophy for the first time in their history, Dave Barrett, who passed away on Tuesday, remains very much part of the city’s senior soccer folklore.

Through the efforts of the then club officials, Michael Wallace, Billy Higgins, Jack Tuohy and Terry McGowan, Dave and Richie Hall were signed from Dublin club Drumcondra in 1969.

They were part of the jigsaw that Ewan Fenton had crafted in his efforts to bring cup glory to Shannonside. (Video from YouTube channel of KillianM2 - Click here for more)

The combination of experience and exceptional local talent that Thursday night paid dividends and with the sides level at 0-0 and well into the second half, Paddy Short placed the ball into the path of the striker who buried it past Drogheda keeper Baxter.

Dave Barrett also had a hand in Limerick’s other two goals in the 3-0 win, both scored by Hughie Hamilton, the second assist a pass of exceptional quality.

A promising player in his very young days in Southampton, Dave Barrett spent a few seasons at Highbury with Arsenal and from there he played for non-league club Guildford City.

He moved to Ireland, played with Dromcondra at Tolka Park, eventually joining a Limerick club that was geared for success.

When Dave left Limerick AFC, he was quickly snapped up by local junior club Ballynanty Rovers, remained with them for five seasons and played a major role in ‘Balla’ reaching the 1976 final of the FAI Junior Cup where they were beaten by Whitehall in Dublin.

In that Ballynanty Rovers team were Pat Lawler, Mick, Noel and Phonsie O’Donnell, Pat and John Ryan and Joe Bourke, who, with Dave Barrett, played in the 1971 cup winning final.

Self-employed as a painter, Dave remained in Limerick for 20 years, heading back with his wife Brendan to his native Southampton in 1989.  The couple have two sons, Darren and Wesley.

Interestingly, he continued his association with the Markets Field and was a keen owner and trainer of greyhounds.

An exceptionally nice person, Dave was extremely popular with his wide selection of friends in Limerick and his death, at the age of 79, is deeply regretted.

Dave and his wife came to Limerick in April, 2011 for the 40th celebration of the famous first FAI Cup victory. Arrangements are being made to have a memorial Mass said for him in the coming weeks in the city, where his wife Brenda and family will be invited to attend.