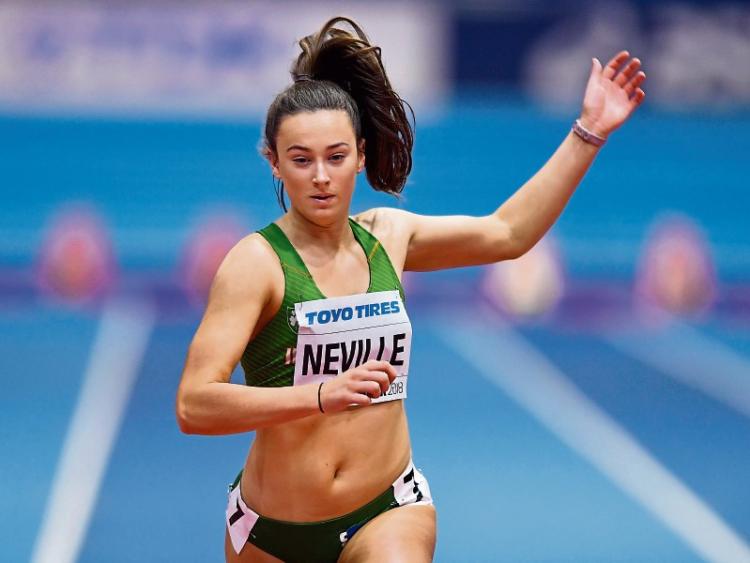 Limerick athlete Ciara Neville, Emerald AC, who enjoyed a successful weekend of competition at the Mannheim Gala in Germany

TWO Limerick athletics turned in excellent performances over the weekend as part of the Irish U-20 team which competed at a prestigious junior international meet, The Mannheim Gala, in Germany.

Eighteen-year-old Emerald AC athlete Ciara Neville finished third in the 100m final in a time of 11.60. Neville, who last week finished her Leaving Certificate at Castletroy College, was just .01 of a second off second position. The final was won by Germany’s Keshia Kwadwo in a time of 11.39.

Talented teenager Neville had earlier won her heat in a time of 11.72 beating Britain’s Vera Chinedu into second place.

Neville was also a member of Ireland’s 4x100m relay team which finished first at the Mannheim Gala. The Irish team, which also included Patience Jumbo-Gula, Rhasidat Adeleke and Gina Akpe Moses won in the race in a time of 44.31, with Germany claiming second spot in 45.18.

Meanwhile, another Limerick athlete who excelled in Mannheim at the weekend was 16-year-old Sophie Meredith, of St Mary’ AC, Rathkeale.

The highly-rated Meredith finished in sixth place in a high quality long jump competition which a jump of six metres.

More than 400 of the best young athletes from all over the world competed at the the 25th Bauhaus Juniors Gala in southwest Germany.