Limerick U-21 hurling title defence ended by loss to Tipperary 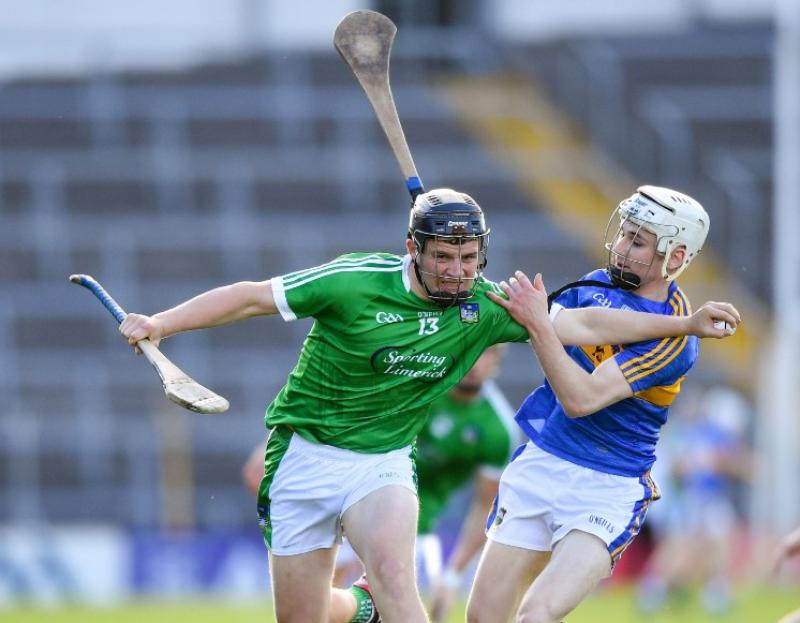 Peter Casey attempts to advance past this Tipperary challenge in Thurles

LIMERICK's title defence came to a tame end in Munster U-21 hurling championship this Thursday evening.

In Thurles, Tipperary ran out easy 1-22 to 1-13 winners to book a July 4 Munster final against Cork.

Pat Donnelly's Limerick were never at the pitch of this semi final, beaten in all positions across Semple Stadium.

Tipperary, who beat Limerick in the Munster minor final three years ago, brought all the spark to this contest.

Tipperary are through to the BGE Munster U21 Hurling Final after a 1-22 to 1-13 win over Limerick! Watch the full-time highlights here. pic.twitter.com/Xq6j9DXAUM

Tipperary hit the ground running and were 0-13 to 0-5 ahead by half time with six different scorers.

Conor Boylan added another Limerick score but two each for Colin English and Mark Kehoe moved the Premier men 0-8 to 0-2 ahead just after the mid-point of the first half.

Barry Murphy had points from a free and from play but it was only a temporary reprieve with Kehoe bringing his tally to four in the half and Morris reaching three as to the lead went out to nine points.

Willie O'Meara had had the final score of the half from distance in a 30-minute period that saw the teams evenly share eight wides.

Before the half time whistle, Limerick were awarded a penalty when Barry Murphy had his helmet pulled off in the goalmouth. The Doon man stepped up to the penalty but crashed his shot off the crossbar.

Watched by an attendance of 3,460 Tipperary eased over the winning line in the second half.

Paddy O'Loughlin scored from play and O'Loughlin and Murphy had frees in the first seven minutes of the second half but each time Tipperary replied to leave it 0-16 to 0-8.

Sub Oisin O'Reilly and Peter Casey (free) found the range for Limerick but there was no fightback.

Micheal Houlilhan added another two pointed frees, but Limerick were to finish with 14-men when captain Kyle Hayes was shown a second yellow card in the first of four minutes of injury time.

That injury time did see Limerick find a goal - sub Kevin Howard doing well to find space and crash to the net.