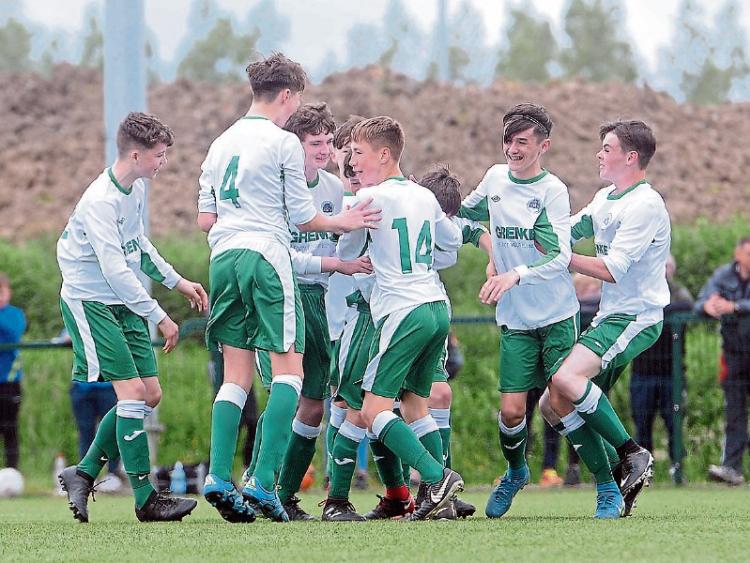 A LIMERICK goal has been included among the 10 best goals at the 2018 SFAI New Balance Kennedy Cup at UL.

Eoin Mulvihill’s excellent strike for the Limerick Desmond Schoolboy League in their Group fixture with North Tpperary is among the best goals of the tournament which featured 96 games over five days.

Mulvihill, of Kildimo, netted his spectacular curling effort in the Desmond side’s 3-1 victory over North Tipperary in their Kennedy Cup Shield quarter-final.

Desmond, who saw their 2-0 lead, reduced to 2-1 before eventually regaining their two-goal advantage, also had goals from Emmet Rigter, of Newcastlewest Town, Adam Hickey, of Rathkeale.

Limerick Desmond eventaully finished in 18th place overall in the 2018 Kennedy Cup after their Shield final with the North Dublin Schoolboy League  Cup was decided by a penalty shoot-out at the UL on Friday.

Neither side could manage to score a goal in normal time or the two periods of extra time which followed.

The game was then decided by a penalty shoot-out with the North Dublin side winning out 4-2 in front of a large attendance.

Elsewhere, the Limerick and District Schoolboy League had to be satisfied with an eight-placed finish overall after losing out 4-3 on penalties to Dundalk in their play-off game on Thursday evening.

Limerick County Schoolboy League claimed a 12th place finish at the 32-team U-14 inter-league event after suffering two penalty shoot-out losses on Thursday, 5-4 to the Kilkenny League and later 6-5 against Clare.