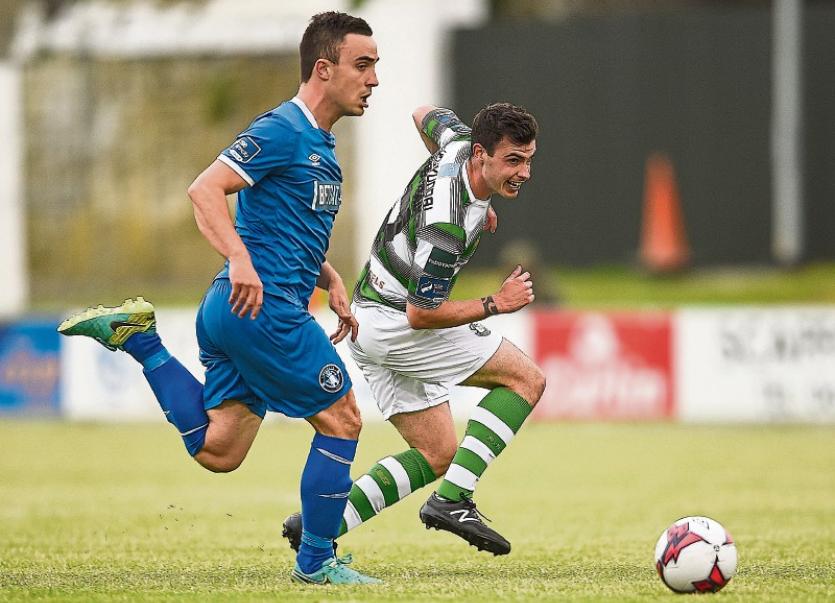 LIMERICK FC were left cursing their luck on the double on Friday night after the Blues crucial SSE Airtricity League tie with Shamrock Rovers at the Markets Field clashed with the first big pool fixture at the FIFA World Cup.

The high profile Iberian derby meeting of Spain and Portugal which had live TV coverage kicked off at 7pm on Friday evening with Limerick FC’s SSE Airtricity League Premier Division clash with Shamrock Rovers getting underway at 7.45pm.

The clash of fixture certainly impacted on  the attendance at the Blues game on Friday night. While no official attendance figure was announced over the PA system, the turnout was in the region of just 700, including up to 100 Shamrock Rovers fans who made the trip to Limerick.

As well as the counter-attraction of the FIFA World Cup, Limerick FCs poor home record this season is also having a negative impact on attendance figures.

The Shannonsiders have won just one league fixture this term, that coming against basement side Bray Wanderers in early March.

Since that 1-0 victory over Wanderers, Limerick have failed to win 10 home league fixtures.

The Blues will be glad of the mid-season break as the Blues struggle to cope with a lengthy injury list to several key players.

Limerick FC chiefs will be anxious that soccer fans turn out in large numbers for the first home fixture after the mid-season break, the mammoth relegation six-pointer with Bray Wanderers on Friday, June 29, 7.45pm.

Limerick manager, Tommy Barrett said: “We have to give the crowd something to cheer about as well.

“I felt we were doing that the last while. Tonight, I would agree, we weren’t great.

“We were well in the game until we gave away a sloppy goal. I would urge the crowd to come (for the Bray game).

“There are some good young lads there on show and probably the younger lads again were the better players tonight.

“We have a lot to take out of it for them. Some of the senior pros probably need to step up to the mark now.”