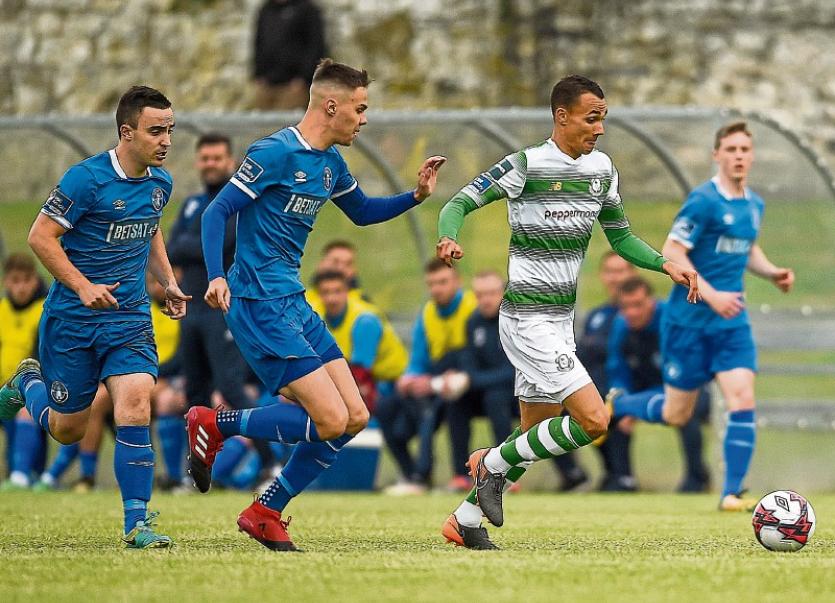 LIMERICK FC’s lengthy wait for a home win in the SSE Airtricity League was extended to more than three months after the struggling Blues fell to a disappointing 2-0 defeat to Shamrock Rovers at the Markets Field.

Limerick, who have won just once in the league at the Markets Field this season, face basement side Bray Wanderers in a crucial fixture when the Premier Division resumes in two weeks’ time on June 29.

Preston North End-bound Graham Burke signed off on his time with Shamrock Rovers by smashing home the Hoops second goal in a routine victory.

The lively Daniel Carr found Irish international Burke with a neat pass just inside Limerick's penalty area two minutes into the second half and the in-form striker finished superbly past Brendan Clarke.

Burke came within a whisker of grabbing a second goal on the hour mark, but his powerful 30-yard free-kick smacked against an upright.

Limerick FC made three changes from the side beaten by Dundalk seven days earlier as Billy Dennehy, Shane Tracy and Daniel Kearns came into the starting line-up to replace Barry Maguire, Tony Whitehead and Conor Clifford.

Visitors Rovers made one change with captain Ronan Finn returning in place of Brandon Kavanagh.

Limerick created the first decent chance of the night on 16 minutes when, following a clever one-two with captain Shane Duggan, Daniel Kearns fired goalwards only for Rovers' keeper Bazunu to block the effort.

The rebound fell to Mark O'Sullivan but his headed effort was taken off the line by Rovers defender Joey O'Brien.

Rovers enjoyed a good deal of possession during the opening half an hour, but found chances hard to come by, although Daniel Carr did drag an effort from inside the box left and wide in the 26th minute.

Preston-bound Burke showed the quality he possesses just after the half hour mark when turning smartly just outside the penalty area, but his sweetly struck effort, dipped just over the crossbar.

Limerick survived an anxious moment in the 42nd minute when Coustrain set up Kavanagh down the left but the latter’s dangerous cross was cleared by Limerick defender Dennehy.

However, Limerick man Coustrain struck for the game’s only goal on the stroke of half-time when the Blues paid a huge price for some very sloppy defending.

Burke’s super strike two minutes into the second half consigned Limerick to defeat and deepened their relegation worries.