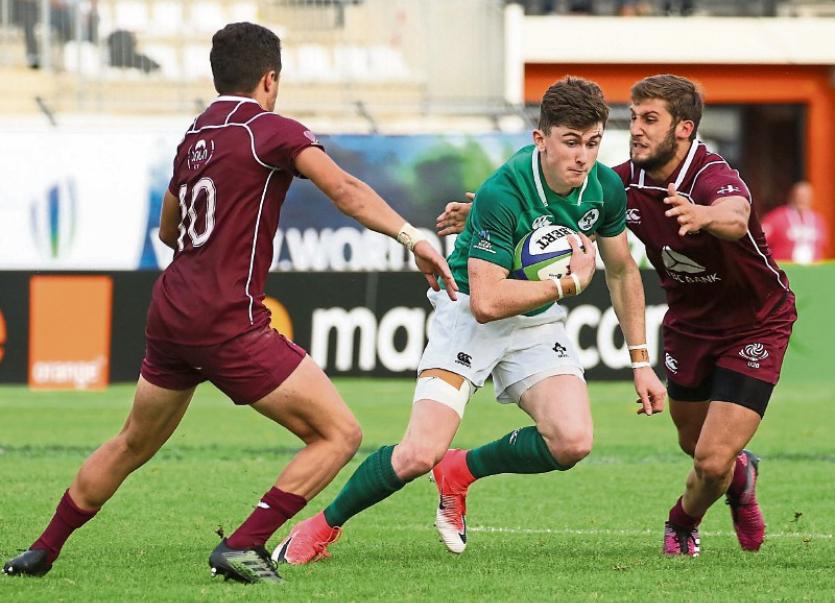 James McCarthy, of UL-Bohemian and Munster, on the charge for Ireland U20s against Georgia U20s in the World Rugby U20 Championship in Narbonne on Thursday night

IRELAND U-20s have suffered a whitewash in the group stages of the World Rugby U-20 Championship for a second successive year after succumbing 24-20 to Georgia in Narbonne on Thursday night.

Ireland, who had earlier lost to hosts France and South Africa, must now face into the play-off battle for 9th-12th places in the hope of securing their place in the competition in 12 months time.

Noel McNamara’s Ireland side will begin the play-off series on Tuesday next.

The bottom-placed team after two play-off games next week will be relegated to the World Trophy.

Georgia, securing their first success ever at this level of competition, thoroughly deserved their success after bossing the breakdown area and forcing Ireland into far too many errors.

Ireland trailed 8-17 at half-time, after out-half Conor Deane touched down shortly before the break. However, once Georgia struck for their third try of the contest four minutes after the re-start effectively sealed their famous win.

The irish did manage two late tries from Cormac Daly and Bryan O’Connor, of UCC, – after having three efforts chalked off by the TMO – to put a more respectable look on the scoreboard at full-time.