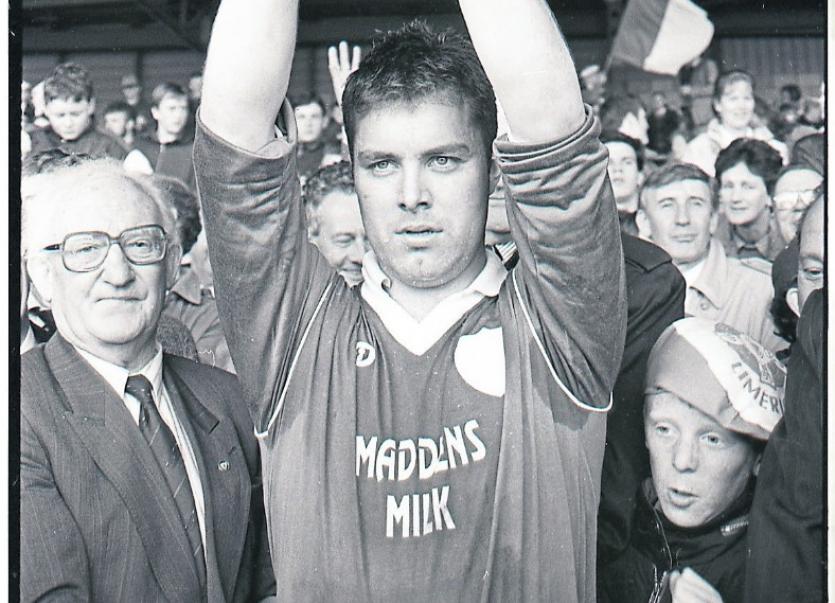 THE phrase “I love me county” is synonymous with Waterford hurling since John Mullane’s emotion filled post match interview after their 2004 Munster SHC title win.

A chance conversation has unearthed a new angle to an old photograph showing the Waterford hurling legend supporting Limerick!

“There was a fella in my club Joey Carton, who is involved with the Munster Council. He is our clubman and coached myself and another chap Mark Dunphy when we were growing up and he used to bring us to all the matches back in the early ‘90s,” John Mullane explained to LeaderSport.

“Waterford weren’t as strong back in the early ‘90s so any game that we would go to, whomever Mark supported, I would support the opposite. That day, Mark was supporting Tipperary and I was supporting Limerick - he bought a Tipperary hat and I bought a Limerick hat. I picked the right team that day!” said the De La Salle man.

“I used to love Ciaran Carey in those years so that would have been a reason I was supporting Limerick.”

“It goes to show what club loyalty does and what lengths elder lads would go to, to keep lads interested. When I look back on my career, it certainly gave me the appetite to push on play with my club and county,” he said of those journeys to matches with Joey Carton.

The game in question is the 1992 National League final between Limerick and Tipperary in the Gaelic Grounds.

Tipperary blazed 0-11 to 0-3 ahead by half-time but Limerick famously fought back to win 0-14 to 0-13 thanks to a late point from sub Ray Sampson.

Joining the presentation party in the Mackey Stand was a youngster wearing a Limerick hat – John Mullane!

“Like any young fella I would squeeze in anywhere,” joked Mullane.

“In 2001 I made my debut against Limerick and we beat Limerick in 2003 and in the 07 Munster final. We beat when they were under Justin McCarthy in 2009 and I got a last minute goal to beat them in 2011. Over the 12 years I would have played we would have had a good record against Limerick,” he recalled, adding the 2007 All Ireland semi final as a low point against Limerick.

What of this Sunday?

“Limerick wouldn’t ever fear Waterford and Waterford wouldn’t fear Limerick. A lot of these players would be familiar with eachother from underage teams. There wouldn’t be any animosity or baggage between Waterford and Limerick - it’s a very healthy rivalry between the two.”

It was felt that Waterford don’t enjoy the Gaelic Ground.

”It would have been our track record over the years but I think that was surely put to bed last Sunday. They looked comfortable playing there last Sunday and it might have banished any bad memories some of those players would have had over the years - two years ago with the Munster final defeat,” said Mullane.