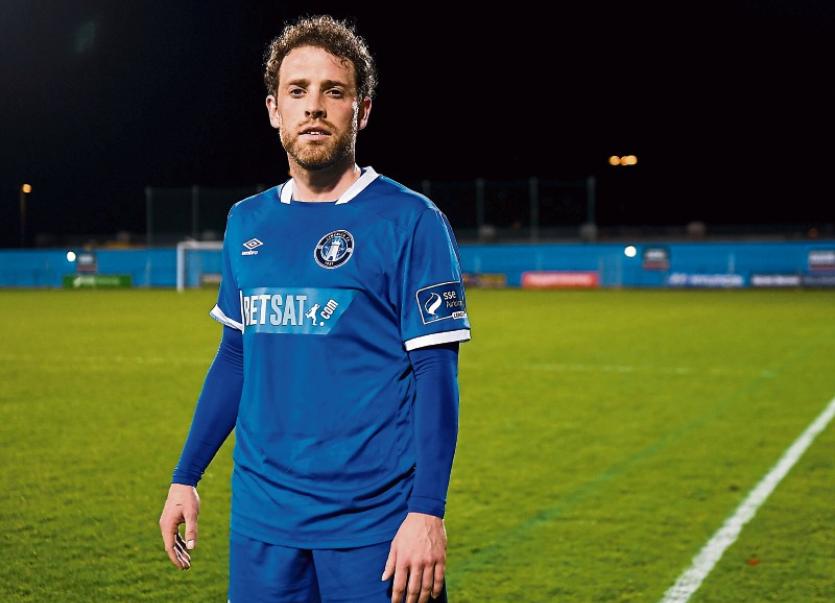 LIMERICK FC were denied their first home win since early March after Bohemians struck for a dramatic late equaliser in a nail-biting 1-1 draw in SSE Airtricity League Premier Division clash played at the Markets Field on Friday night.

Barry Maguire’s first half goal looked to have ended Limerick’s bid for a first home Premier Division win in nine games. However, Tommy Barrett’s side were denied all three points when Dan Casey fired home an equaliser for the Gypsies four minutes from time.

Limerick, who occupy the relegation play-off position in the Premier Division have taken five points out of possible 21 in their last seven league fixtures.

The sense of frustration for Blues fans at full time was heightened when news came through of wins elsewhere for fellow strugglers Bray Wanderers and Sligo Rovers.

The home needed to grab a second goal when dominating the game in the opening half. However, the Blues didn't manage it and paid a heavy price as the Dubliners struck for their late equaliser.

Limerick manager Tommy Barrett had plenty of injuries to deal with  at present, as strikers Connor Ellis (hip), Danny Morrissey (hamstring) and defender Darren Dennehy (ankle) are all sidelined, while midfielder Cian Coleman missed out through suspension.

Barrett was also  without the services of winger Henry Cameron who is away on international duty.

The first real chance of evening fell to Limerick on 10 minutes when William Fitzgerald played in Barry Maguire but his shot was straight at Shane Supple and Daniel Kearns fired the rebound wide.

Bohs’ keeper Supple had left Martin O’Neill’s Republic of Ireland squad ahead of Saturday night’s friendly with the USA in order to feature for the Gypsies.

The visitors’ best chance of the opening quarter came in the 19th minute, but Dylan Watts’ header was collected safely by Blues ‘keeper Brendan Clarke.

The see-saw nature of the game continued as the half wore on and when Fitzgerald surged to the by-line in the 27th minute before crossing, the ball fell to the in-rushing Shane Duggan whose delicious volley looked to have Supple beaten, but the ball richoeted off defender Rob Cornwall before the danger was cleared.

Limerick deservedly took the lead on 34 minutes after a delightful piece of football.

The lively Daniel Kearns created  the opening, before Fitzgerald hit an inch perfect cross which was knocked into the path of Maguire who volleyed the ball in from close range.

The Blues should have been 2-0 up a few minutes later. Fitzgerald broke into the penalty area before pulling the ball back for goalscorer Maguire who unfortunately shot wide.

Limerick dominated the spell coming up to half-time, but unfortunately failed to add to their single goal advantage.

Visitors Bohemians should have been on level terms within two minutes of the restart when Paddy Kavanagh took advantage of some slack defending to cut in from the right. His centre found Watts, but Blues’ ‘keeper Clarke did superbly to smother his shot on goal from 12 yards out.

After surviving that scare, Limerick regained their grip on the game. The Blues came agonisingly close to adding a second goal in the 78th minute when substitute Karl O’Sullivan picked the ball up outside his own penalty area before showing a terrific turn of pace to race clear and unleash an excellent shot goalward.

However, Supple did superbly to push the ball out for a corner.

Bohemians were not done, however, and after Blues keeper Clarke had done superbly to deny Watts with a fine stop, the visitors picked up the seconds and while the home keeper stopped Morris’ effort, Dan Casey fired into the empty net.

Indeed. Bohs’ might have nicked it late on, but Keith Ward show wide with the goal at his mercy.

Next up for Limerick is a demanding trip to Oriel Park to face Dundalk on Friday night next, 7.45pm. The Blues last visit to Co Louth ended in an 8-0 thumping.