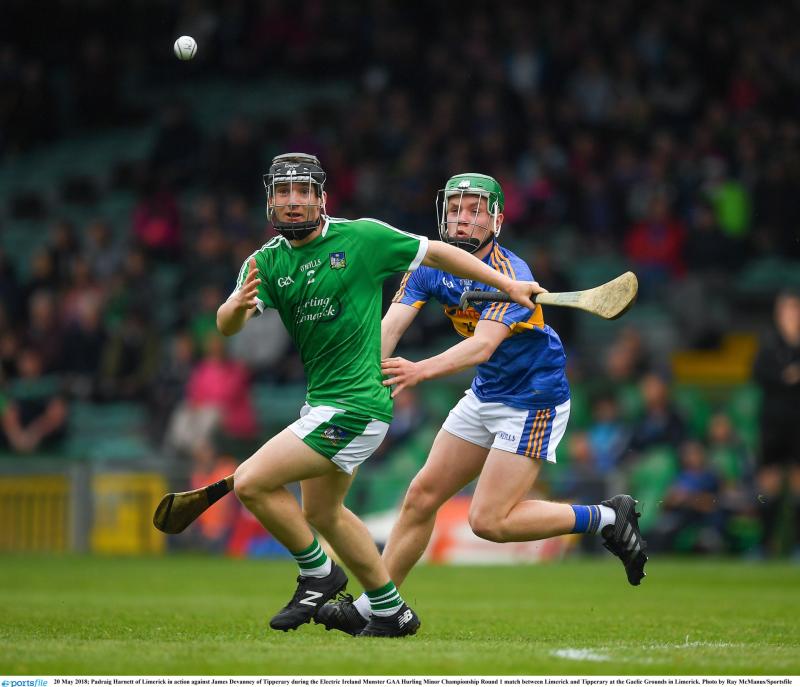 THERE was late drama in the Gaelic Grounds as the Limerick minors scored three points in injury time to secure a two-point win over Tipperary in the first round of the new-look MHC.

Now an U-17 competition, Cathal O’Neill was the hero as he shot 0-11 – including seven from play.

This was the first of four games in the round robin as Antoin Power’s men still have three games to play in the Championship with Cork (away), Waterford (home) and Clare (away) still to come.

Limerick struggled to get a foothold in the opening exchanges as the home side looked nervous in possession.

Scores from James Devanney and Ryan Renehan put the visitors 0-2 to no score ahead after seven minutes.

Limerick finally got on the board when Crecora’s Cathal O’Neill hit over a ’65 in the tenth minute before Kian O’Kelly put extended the Tipp lad back to two.

Limerick had a goal chance in the 14th but after an impressive run, Bryan Nix couldn’t finish – his mis-hit effort saved by Aaron Browne.

O’Neill added three scores (two from play) to his personal account as he brought Limerick level (0-4 apiece) after 22 minutes.

Tipp were awarded a penalty after 23 minutes after Sean Hayes was fouled. However, Limerick goalkeeper Bryan Heavey stopped Renehan’s effort, tipping it over the bar.

However, Limerick kept fighting and two superb Bob Purcell points, added to the accuracy of O’Neill meant that the home side trailed by just one, 0-8 to 0-7, at the interval – a first period where Tipp shot 10 wides.

After Tipp opened the second half scoring, O’Neill hit two in a row – bringing the Crecora-Manister man to 0-7 for the afternoon and the game level at 0-9 each.

Colin Coughlan then shot Limerick into their first lead of the game – the Ballybrown man hitting over a fine score after good work from Bob Purcell.

However, just as they were looking strong, Tipp hit Limerick with a sucker-punch as Sean Hayes netted twice in two minutes to put the Premier in the ascendency.

But this Limerick team never gave up and two minutes later, Cormac Ryan got a goal of his own – the Doon man’s effort reducing the deficit to just one before O’Neill hit a long range free to level the game with just six minutes remaining.

The Ardscoil Ris harty Cup winner popped up again to score his fifth from play, his ninth overall to shoot the home side back in front.

The sides swapped scores before Coughlan put Limerick back in front in injury time before Cormac Ryan doubled their lead.

With time all but up, O’Neill hit over his eleventh to secure a well-deserved win.