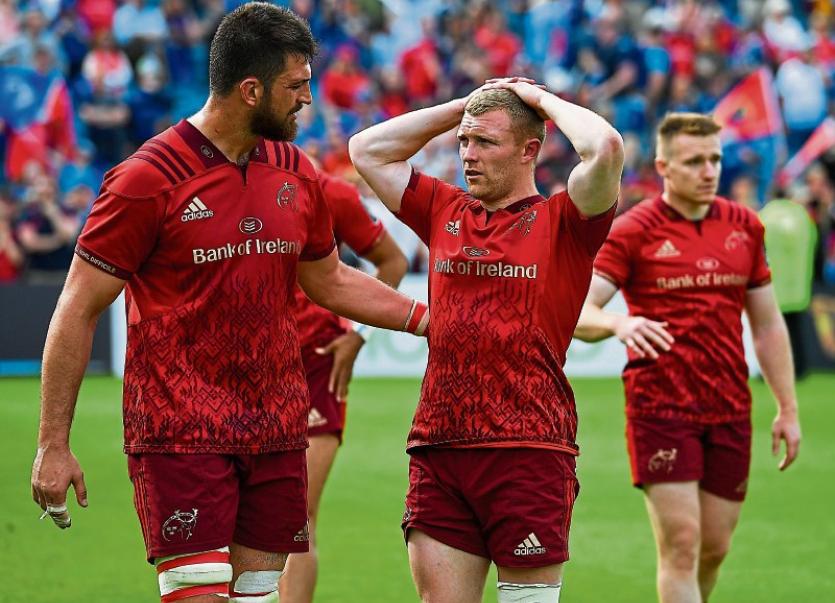 Munster second-row Jean Kleyn, left, with Keith Earls at full-time in their Guinness Pro14 semi-final defeat to Leinster at the RDS Arena on Saturday

MUNSTER head coach Johann van Graan admitted he was ‘bitterly disappointed’ after his side shipped a dramatic 16-15 defeat to double-chasing Leinster in their Guinness Pro14 semi-final at the RDS Arena on Saturday.

This was Munster’s third semi-final defeat in the last two season’s following reverses at the last four stage of the Champions Cup to Saracens 12 months ago and Racing 92 in Bordeaux last month.

It is now seven seasons since Munster have won a trophy.

Afterwards Van Graan, who took over as head coach of Munster last November said; “It was a typical semi-final, two teams that really wanted to win. Both teams left one or two opportunities out there and at the end of the end of the day, there was one point in it. Unfortunately one point is the biggest and the smallest margin in rugby.

“Bitterly disappointed. Credit to Leinster for winning the semi.

“There were one or two moments that we created. A big moment and a massive call in the left hand corner in the second half. Unfortunately, it didn’t go our way.

“I was very happy about the opportunities that we created, possibly work on our execution and finishing some of those opportunities. It is finished now.”

Asked about the yellow card picked up by Jean Kleyn in the opening half for an illegal clear-out of a ruck, van Graan said: “I will go and have a look at it without emotion. It was a big call in the game. A scrum five yards away. Obviously in a semi-final if you concede a yellow card, it costs you.

“I will go and have a look at it without emotion once I get home.”