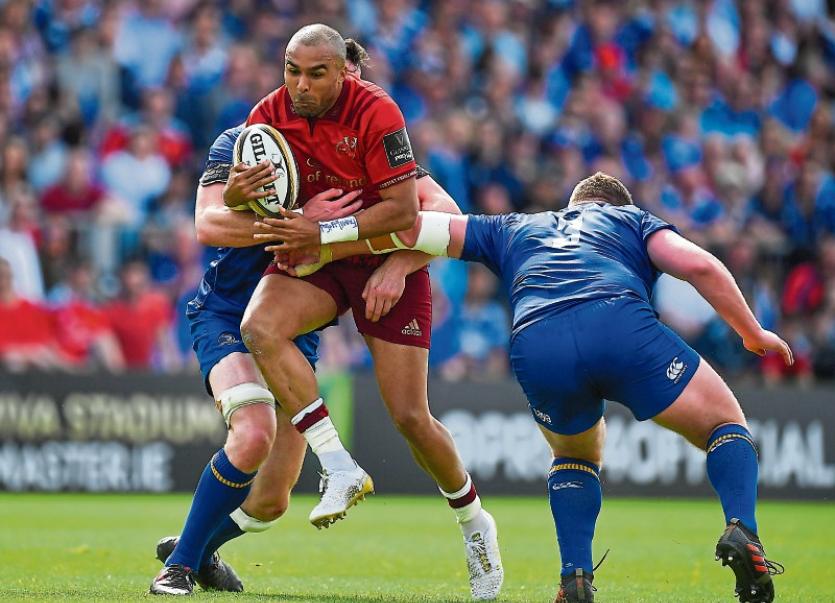 Munster's Simon Zebo is tackled by James Ryan and Tadhg Furlong, of Leinster, in their Guinness Pro14 semi-final at the RDS on Saturday

MUNSTER’S Dublin hoodoo came back to haunt them at the RDS Arena on Saturday as double-chasing Leinster inflicted a frustrating 16-15 Guinness Pro14 semi-final defeat on Johann van Graan’s side before a capacity crowd of almost 19,000.

Munster’s only previous victory at the RDS was ten 10 years ago in 2008, while their only victory over Leinster since then in Dublin was a 34-23 at the Aviva Stadium in October 2014.

This was the third time this season that Leinster, who will face the Scarlets in next Saturday's Pro14 final, have beaten Munster this season in the competition.

Munster will look back on this game of small margins as a missed opportunity. The visitors enjoyed the lions share of possession and territory, but lacked that bit of guile and craft necessary to sufficiently hurt Leinster’s excellent defence, certain to have been stressed by their Champions Cup final exertions of a week earlier.

Munster’s discipline was an issue too as last year’s Pro12 finalists were penalised 14 times in all compared to Leinster’s tally of just six penalties.

Van Graan’s side will argue the toss on some of those penalty decisions and rightly so, but the high penalty count allowed Leinster to build momentum and pressure.

Leinster dominated at scrum-time also, awarded a hatful of penalties in the set-piece which turned the game in the Champions Cup winners favour.

After an encouraging start from Munster, Leinster struck of the game’s opening score after eight minutes. The visitors failed to contain the rampaging James Lowe’s powerful break up the left wing and his delightful off-load found a grateful Jack Conan who powered over the tryline from close range. Carbery’s conversion made it 7-0 to the home side.

Munster lost flanker Jack O’Donoghue to an unfortunate injury soon after and he was replaced by Robin Copeland.

The top-of-the-ground conditions and warm sunshine made for a quick tempo game, with South African referee Stuart Berry also aiding the flow of the game, adapting a lenient approach at the breakdown.

Munster needed to reply with points to the concession of that early try and out-half JJ Hanrahan, preferred to Ian Keatley once again, duly obliged with an 18th minute penalty goal for 7-3.

However, that respite was short-lived as Billy Holland was pinged for not rolling away in the 20th minute and Ross Byrne slotted a penalty goal from the 10 metre line for 10-3.

It took a superb cover tackle from Sam Arnold in the left corner to prevent Leinster winger Lowe from adding a second try from the home side in the 23rd minute as the hectic pace of the game was unrelenting.

Munster missed out on an opportunity to reduce their appears when Hanrahan was off target with a penalty attempt after the visitors earned good field position off a powerful scrum and terrific break from Conor Murray.

Munster lost second-row Jean Kleyn to a yellow card in the 37th minute as he his clear out at ruck time was judged dangerous as he didn’t lead with his arms.

Leinster retained their lead until half-time. However, Munster, with Ian Keatley now at out-half, made the perfect start to the second half when Keith Earls dotted down after Zebo picked him out with a clever start. Keatley was off target with the conversion.

The home side missed out on an opportunity to increase their lead in the 52nd minute when Munster were penalised for collapsing a scrum. However, Byrne was off target with the resultant penalty.

Leinster continued to turn the screw at scrum-time, but Byrne was off target with another penalty award in the 59th minute.

The penalty count against Munster had cerpt up to 11 by the hour mark, while Leinster were penalised just four times by South African referee Berry.

Both sides had emptied their respective benches by the hour mark. Munster did have a chance to reduce their hosts’ lead with a 72nd minute penalty, but opted for the corner rather than a kick at goal with 10 minutes remaining. The gamble didn’t pay off as Munster pinged for holding on.

Moments later Leinster won yet another scrum penalty and a change of kicker saw Joey Carbery kick his side into a two-score lead at 16-8 with four minutes remaining.

Munster were handed a lifeline in the 79th minute when replacement Gerbrandt Grobler touched down, with Keatley converting for 16-15.

However, time ultimately run out on Munster’s hopes and ultimately on a season which promised much but ultimately ended in two semi-final defeats.

At full-time, Simon Zebo, who departs for Racing 92 next season applauded the Munster fans in the stands.

Zebo, Robin Copeland and try-scorer Grobler depart for pastures new in the summer.