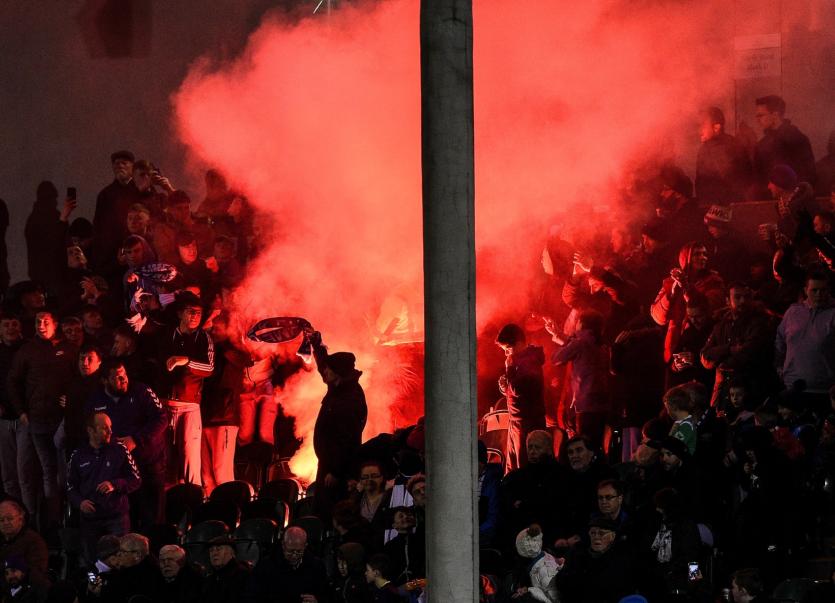 An image of Limerick FC fans at the home game against Cork City. The use of flares was addressed in the club statement

THE Blue Army, an organised section of Limerick FC fans, has responded to a strongly worded statement issued by the soccer club which hit out at certain sections of the home crowd.

The statement stated that some of the home fan's behaviour was “disgusting”, even going as far as refusing to call the people in question "supporters”.

The Blue Army, which gives its aim (on their Facebook page) as "to get Limerick FC fans to as many games as possible" issued a statement late on Tuesday night. The statement, which by no means indicates that its members where those that the club was referring to, do admits that they met the club last week to discuss off the field matters.

The statement from Limerick FC seems to have come as a surprise to the supporters group and following some consultation, the group has decided that it will "no longer be attending home games"

The statement in full from the group is below and a link to their page is here:

"Last Friday representatives of the Blue Army met with members of the club issues were discussed and as far as we were aware the issues were sorted and we would be moving on together for the better of the team and club.

"One such issue was the "non football related chants" where members of the club actually commended the actions of our group who stamped it out immediately. The club have yet again gone back on their word to us to attack us.

"One line from the attack reads that we are not needed or welcome at games. This being the case the club can have their wish as we have decided as a group we will no longer be attending home games. If individuals from the group would like to attend games we have absolutely no problem with that and we are not asking anyone to stay away.

"We want to make it clear the actions of any individual that goes to games have nothing to do with the group as a group we will not be in attendance," the statement adds.