100% record for trio after Limerick SHC round two games 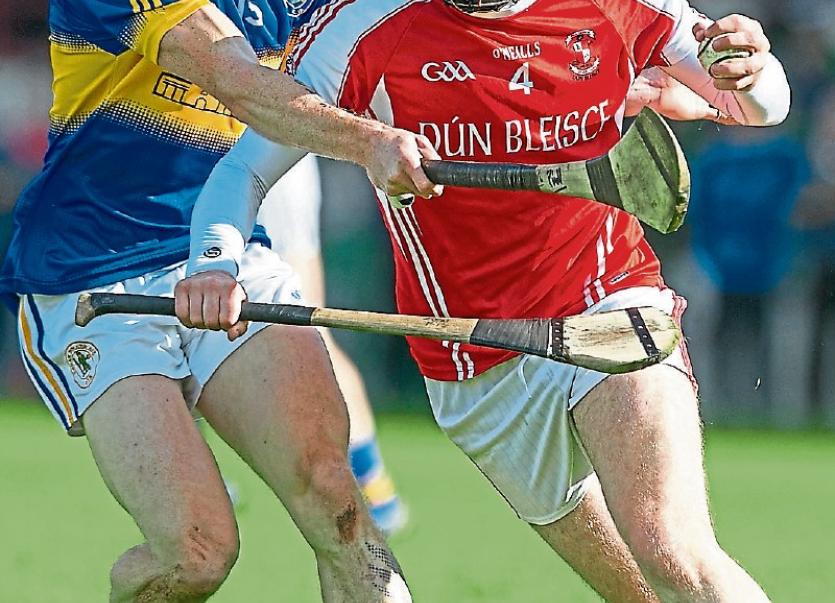 KILMALLOCK and South Liberties have joined Na Piarsaigh as the only sides with 100% records after two rounds of the Credit Union Limerick SHC.

This Sunday evening Kilmallock were 2-17 to 0-14 winners over Adare, while South Liberties beat Knockainey; 3-18 to 2-9.

Adare led 0-10 to 1-6 at half time after the sides were level on six occasions.

The lead came despite a sixth minute goal for Gavin O’Mahony from a long range free.

Adare had John Fitzgibbon and Willie Griffin points from placed balls to help them to the half time lead.

But Ger O’Loughlin’s side, who lost by 14 points in round one, were only to score four second half points.

Kilmallock took over with a run of six successive points to lead 1-14 to 0-11 entering the final quarter.

The second Kilmallock goal came from Oisin O’Reilly – 10 minutes from the end of a contest which saw Graeme Mulcahy score five points from play for the second successive game.

In Cappamore, South Liberties had 12-points to spare over Knockainey.

William Hickey had a hat-trick of goals for the winners, with Padraic Barron scoring two for the All Blacks in defeat.

Hickey added an early second half goal and they winners were 3-14 to 1-7 clear entering the final quarter after he scored his third.

Hickey ended with 3-2 from play, while free taker Brian Ryan hit eight for the winners. Knockainey had six points from Kieran Cleary.

After losing by eight points to Na Piarsaigh in round one, Doon were 1-11 to 0-8 up on Patrickswell at half time.

Dean Coleman had the Doon goal in the eighth minute to give them a lead they never lost.

Coleman and Pat Ryan had two points each in the half.

Patrickswell, who beat Adare by 14-points in round one, were actually 0-3 to 0-1 up after five minutes with two Aaron Gillane points from play.

In the second half, Josh Considine had a 10th minute goal and with 13-minutes gone in the half it was Doon 1-13, Patrickswell 1-12.

But The Well never got back level with points from Barry Murphy and Darragh O’Donovan ensuring Doon stayed ahead until the final whistle in Kilmallock.

Seanie Tobin finished with 10-points for the winners – four from play for a side that lost by one point to South Liberties the previous weekend.

Ahane ended the game with 13-men – Niall Moran sent off in the first half and Evan Enright in the final quarter.

Ahane had a nine point return from Tom Morrissey – four from play.

At half time, Murroe-Boher were 0-6 to 0-4 ahead with Tobin accounting for all bar one of their scores.

With five minutes to play the newly promoted side were three points clear but John Fox and Morrissey had points for Ahane, who just held short of securing the draw. The previous week they had found the final five points to beat Cappamore by three.

*See the print editions of the Limerick Leader for full match reports on all six weekend Limerick SHC games.