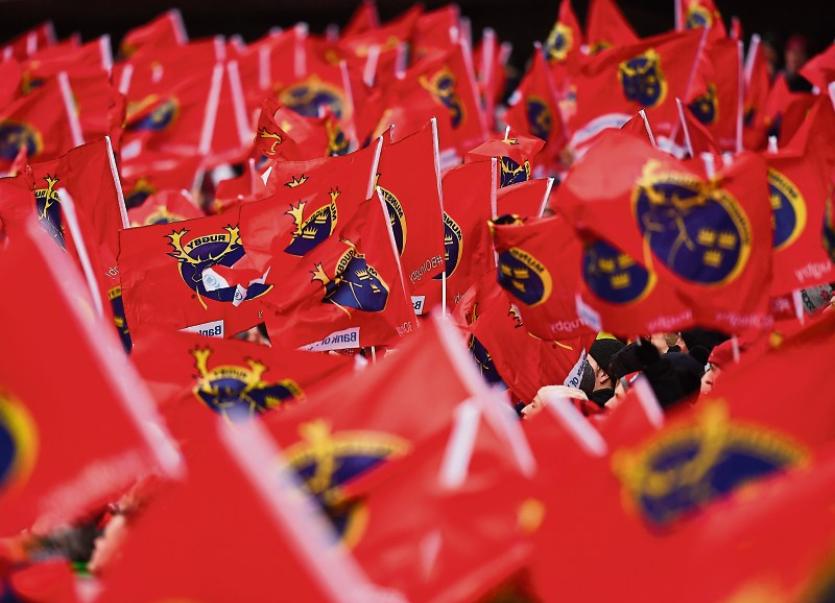 The 2018 Munster Rugby Awards were presented in Cork this Wednesday

IN-FORM winger Keith Earls has capped a memorable season with Munster by being crowned the province’s Senior Player of the Year this Wednesday.

Earls was presented with his award at 2018 Munster Rugby Awards ceremony which took place at the Clayton Silver Springs Hotel.

The late Anthony Foley was inducted into the Munster Rugby Hall of Fame at the awards and Olive Foley, wife of the former Munster number eight, captain and head coach was on hand to accept the accolade.

Meanwhile, Old Crescent, who won promotion to Division 2A of the Ulster Bank League after winning the Division 2B title in emphatic fashion, claimed the Senior Club of the Year accolade.

The Referee of the Year award went to Limerick woman Joy Neville for the second successive year, while the Women's Player of the Year accolade went to another Shannonside native Gillian Bourke.

The Club Youth Section of the Year was awarded to Newport RFC.

The Munster senior squad and management were all in attendance at the awards, joining domestic game volunteers in recognising and honouring rugby achievements across the province with all proceeds raised on the day going towards the Irish Heart Foundation – Munster Rugby’s nominated charity for the current season.

Fending off strong competition from Jean Kleyn and Rory Scannell, Keith Earls was named this year’s Munster Rugby Player of the Year after a hugely impressive season.

Highly regarded on and off the field, Earls has made 150 appearances for Munster to date and has scored five tries in nine starts this season. He also starred on international duty, playing a vital role in Ireland’s Grand Slam success.

The Munster Rugby Awards is not the only forum to recognise his contribution this season. Earls was also nominated for 6 Nations Player of the Championship and is in the running for the Rugby Players Ireland Players’ Player of the Year award.

Young Player of the Year was awarded to 22-year-old Arnold in his second season at the province. An outstanding campaign has seen Arnold establish himself as a key member of the Munster backline.

After missing the early stages of the season through injury, the centre came into the side in November and has been a near ever-present since.

Standout performances in the two victories over Leicester Tigers and the Champions Cup quarter-final win over Toulon are just some of the highlights in his season so far.

The John McCarthy Award for Greencore Munster Rugby Academy Player of the Year went to Fineen Wycherley. In just his second year with the Academy, Wycherley moves up to a development contract next season after impressing in his two seasons as a member of the Academy.

The 20-year-old Bantry man made his competitive debut against Cardiff Blues in March 2017 and has made six senior appearances to date.

An Ireland U20s international, the lock helped Munster A to last year’s British and Irish Cup title and has been a model professional this season showing great dedication in battling back from a number of injuries.

Women’s Player of the Year – Gill Bourke
Two-time 6 Nations winner Gillian Bourke is the Munster Women's Player of The Year having played an integral role as Munster reclaimed the Interprovincial title.

Her accuracy at hooker and leadership within the group were key as Munster defeated Leinster in the Thomond Park decider to rule the roost in Ireland once again.

This season also saw Bourke play for Munster in the inaugural Women’s Barbarian fixture. She later was invited to become a Barbarian herself, taking to the field on St Patrick’s Day in a clash against the British Army.

Referee of the Year – Joy Neville
Since winning this award last year, Joy’s career in refereeing has gone from strength to strength. In what has been a memorable 12 months, Joy has taken charge of the Women’s Rugby World Cup final between New Zealand and England and become the first female to referee in the European Challenge Cup and Guinness PRO14.

In November she was in the middle for the men’s international between Norway and Denmark, as well as being assistant referee for Spain v Canada and France v Japan. She had the whistle for two matches in this year’s Women’s Six Nations, acted as assistant referee in the European Champions Cup and continued to referee in the All Ireland League, British & Irish Cup and World Sevens Series.

Hall of Fame Award – Anthony Foley
Anthony Foley was the embodiment of Munster Rugby. Axel – as he was known to family, friends and supporters – carried a sense of belief, passion and a never-say-die attitude throughout his rugby career. And what a trailblazing career it truly was, one that was deeply rooted in the club game.

Perhaps what fans will remember most fondly was the seismic part Foley played in Munster’s rollercoaster European journey. There for every single twist and turn of their path to the Holy Grail, heartbreaking defeats in the European finals of 2000 and 2002, and subsequent semi- and quarter-final exits, only served to reaffirm his belief that he was part of something special and Munster’s day would come.

May 20, 2006, his ambitions were realised and, as someone who had given his all, and some, to the cause, it was fitting that Foley was the one who lifted the trophy when Munster won their first European Cup in Cardiff’s Millennium Stadium. In making 86 appearances in Europe, his 23-try haul is yet to be surpassed with Simon Zebo equalling the record in the Champions Cup semi-final loss to Racing 92 last weekend.

A captain and leader at every stage of his career the number 8 moved into coaching following retirement in 2008, taking over as Munster’s Head Coach in 2014.

While inducting Axel posthumously into our Hall of Fame is a circumstance we never envisaged, all can agree it is an honour that would never have eluded him, and there can be little doubt that such a figurehead is more than worthy of the honour.

Senior Club of the Year – Old Crescent RFC
A record-breaking season which saw the men from Rosbrien promoted to Division 2A of the All Ireland League.

The 2017/18 Division 2B title was secured with the most table points (83), most points scored (635), most try bonus-points (13) and highest points difference (353), across all five divisions, as well as being the only one of the 50 sides competing in the AIL to go the entire league campaign unbeaten. Their Second XV also made the semi-final of the Senior Seconds League.

Junior Club of the Year – Richmond RFC
Founded in 1928, the Canal bank side are celebrating their 90th anniversary this year. The Limerick club lost only one league game this season, finishing level with Bandon but losing out on the ‘number of wins’ rule. They contest the Bank of Ireland Munster Junior Cup final against Cork Constitution on Sunday at Irish Independent Park and are also due to take on Newcastle West in the Transfield Cup Final (Richmond the winners for the past two years).

While their second team compete in the Gleeson League, they are also big advocates of the women’s game and their Women’s XV compete in the Women’s Qualifying League Division 1. Richmond have also been successful off the pitch with a new entrance to the club grounds, a new clubhouse, a new training pitch, match floodlights, and two training pitches available in the 2018/19 season.

Club Youth Section of the Year – Newport RFC
The last 12 months has seen Newport RFC bring their underage membership from 60 players to over 200 players (both boys and girls), competing competitively in their respective age grades, whilst having to travel for all games as their new home grounds, Rockvale Park in Newport, is under construction.

Their U16 team valiantly performed for the club week in week out, while their U13s reached the final of their Conference. Their U14s joined forces with Ballina/Kilaloe while their U18 Girls XV reached the Munster Plate final. Underage rugby in growing from strength to strength in Newport under difficult circumstances, which is a credit to all of those involved.

School of the Year – Glenstal Abbey
A historic season for the boys from Glenstal Abbey who captured the Clayton Hotels Munster Schools Senior Cup for the first time after being involved in two previous finals, one against Rockwell in 1970 and the other against PBC in 2017.

Superbly coached by Sean Skeehan, the cup was secured in fine style after victories over Rockwell (10-8); Bandon Grammar (24-7); Crescent College (30-10) before overcoming CBC (18-17) in the final at Irish Independent Park.

Club Mini Section of the Year – Killarney RFC
Since moving to their new grounds at Aghadoe in 2015, Killarney RFC have made huge strides forward and now field sides from U7s to U18s. Growing the game in one of the country’s GAA heartlands, the club has also run girls-only mini player initiatives this year, hosting several events throughout the season.

The club takes an active interest in promoting rugby in the local national schools as well as being proactive in getting their coaches accredited.