Boost for Munster ahead of Racing 92 semi-final showdown 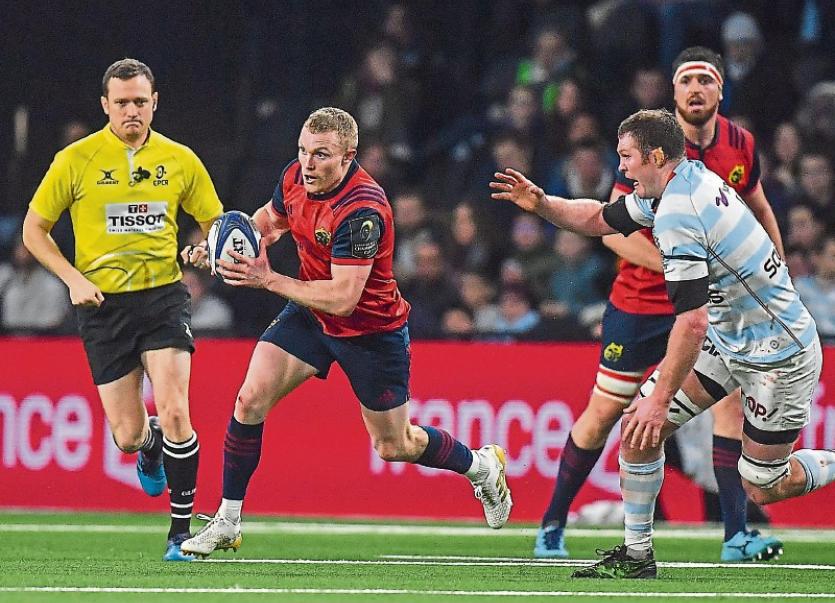 Munster's Keith Earls beats his former team-mate Donnacha Ryan, of Racing 92, in their Champions Cup pool fixture at the U Arena in January

MUNSTER have received a significant boost on the injury front ahead of this weekend’s glamour Champions Cup semi-final with Racing 92 in Bordeaux.

Winger Keith Earls, who has been troubled with a knee injury in recent weeks, is expected to return to full training this week ahead of Sunday’s tie at the Stade Chaban Delmas.

Earls continues to make strides with his recovery from a knee injury sustained in the Grand Slam win against England on St Patrick’s Day.

Meanwhile, prop James Cronin, who sustained a stinger/shoulder injury against the Southern Kings in the Guinness Pro14 earlier this month, is progressing well and is expected to return to full contact training this week.

After departing Bloemfontein, South Africa on Saturday morning, the Munster players returned home late Sunday afternoon, and will join the wider playing group in the High Performance Centre tomorrow, Tuesday, morning in preparing for the Champions Cup last four clash with the French Top 14 side.

In a further boost on the injury front, Duncan Williams’ facial injury is reported to be healing much better than first expected.

The scrum-half, who was initially ruled out for the remainder of the season after undergoing surgery for an eye, cheekbone and palate injury, will meet with the specialist to review an earlier return timeline.

Following Friday night’s win against the Cheetahs, Jack O’Donoghue and Dan Goggin are being assessed for respective ankle and knee knocks, while James Hart is following return to play protocols this week.