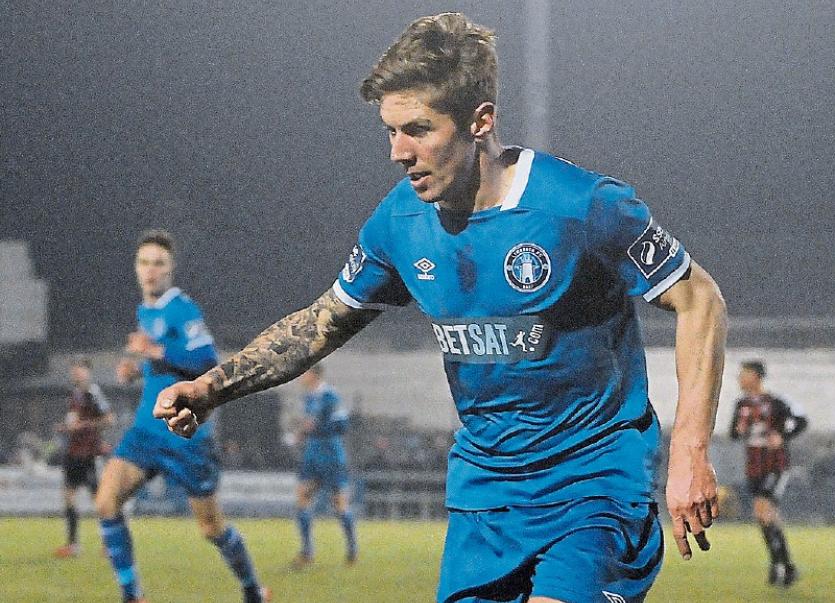 STRUGGLING Limerick FC dropped to second-from-bottom in the SSE Airtricity League Premier Division after suffering a disappointing 2-1 defeat to fellow strugglers Sligo Rovers at the Markets Field on Saturday night.

Two second half goals, including a stunning free-kick effort from Rhys McCabe, struck from well inside his own half, consigned the Blues to their sixth defeat in 11 top flight games this season.

Substitute Daniel Kearns did fire Limerick’s first goal for close on 600 minutes of football when netting from close range in the 89th minute.

However, Sligo held on to deservedly claim the three precious league points on offer and as a result leapfrop their hosts into eighth-place in the table.

Limerick have now taken just two points from a possible 21 in the Premier Division.

It doesn’t get any easier for Limerick in the short term as Premier Division leaders Dundalk visit the Markets Field on Tuesday night, 7.45pm.

One of the few bright spots for Limerick on a frustrating night was the eye-catching display of debutant Conor Clifford. The former Dundalk and Chelsea starlet returned to football following a ban for betting offences, came in for an immediate start for the home side.

Limerick continue to struggle in front of goal and while Kearns did end the drought late on, Limerick have managed just five goals in their 12 top flight league fixtures this season.

Both sides were confined to a couple of half chances in the opening half of the contest.

Sligo’s Eduardo Pinceli forced a smart save from Blues ‘keeper Brendan Clarke in the 24th minute after he turned sharply in the box before firing his well-struck effort goalwards.

At the other end,  Kyle McFadden denied Limerick Mark O'Sullivan with a terrific block after he looked odds on to score following good build up play between debutant Clifford and Tony Whitehead.

Limerick FC came oh so close to taking the lead in the 49th minute through Billy Dennehy. However, his dipping volley over stranded Sligo ‘keeper Mitchell Beeney was headed off the line by Rovers captain Kyle McFadden.

The home supporters were left stunned in the 58th minute, however, when the visitors hit the front. The quick-thinking Rhys McCabe fired Sligo in front when scoring from a free-kick from inside his own half, spotting Brendan Clarke off his line.

The Limerick FC players and supporters protested that the ball was moving when McCabe struck it, but their pleas to have the goal disallowed fell on deaf ears.

Limerick FC manager Barrett introduced both Will Fitzgerald and Daniel Kearns soon after in a bid to find the inspiration that would lead to a long-awaited goal.

The Blues came agonisingly close to equalising in the 79th minute following a spot on pinball in the Sligo Rovers penalty area. However, Killian Cantwell’s shot which was the best struck of three or four attempts was blocked by Rovers ‘keeper Benney.

Once again this season, Limerick paid a heavy price for their lack of cutting edge in front of goal when Sligo substitute Greg Moorehouse doubled the visitors advantage with a precious second goal on 82 minutes.

Kearns’ late strike was no more than a consolation goal for Limerick as Sligo held on to record a fully-merited victory.