Johann van Graan: Munster have self-belief to 'do the unthinkable' and ‘make dreams come true’ 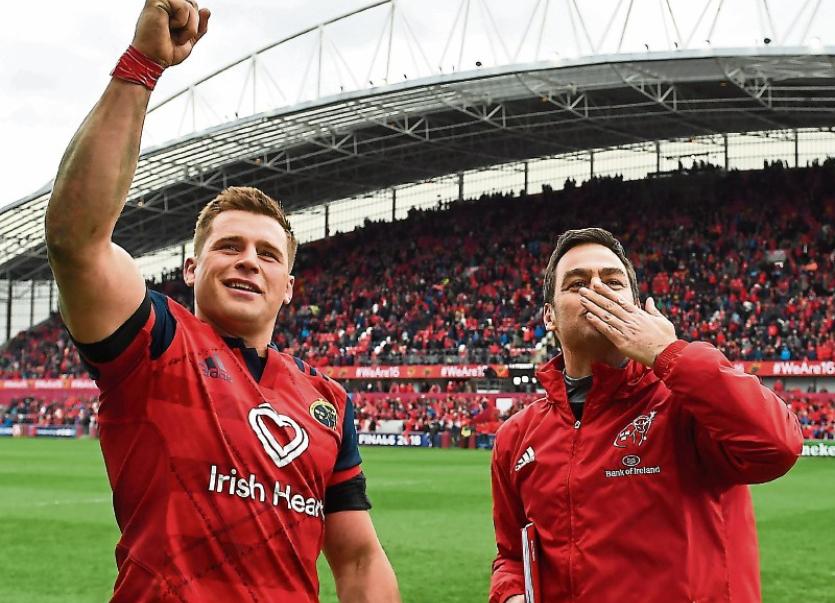 MUNSTER head coach Johann van Graan said the indomitable spirit that exists in the squad, allows the side to ‘do the unthinkable’ and ‘make dreams come true.’

Munster qualified for their 13th Champions Cup semi-final after securing a nail-biting 20-19 quarter-final win over French heavyweights Toulon at a ‘sold-out’ Thomond Park on Easter Saturday.

Andrew Conway’s stunning 76th minute solo try and Ian Keatley’s nerveless conversion eased Van Graan’s side through to a semi-final showdown with either Clermont Auvergne or Racing 92 in France.

75th minute ⏱
Trailing at home
Take it away Andrew Conway...

Afterwards Van Graan said: "It was an incredible game of rugby. I thought two great sides, two great clubs that went at each other for 82, 83 or 84 minutes.

"There were a lot of ebbs and swings in that game. I thought they started really well. I thought we fought our way back into it. We got some momentum straight after half-time, put points on the board.

"We scored a try, they scored a try. We were six points down. We plan for situations like this. It is easy to plan it, it is very difficult to execute it.

"We scored a fantastic try, converted it to kill the game there for the last few minutes. I think gratitude is the main word.

"It is a fantastic honour to coach a group of warriors.

"If it gets better than this it is going to be something amazing because like I said before, all the odds were stacked against us, I don't think a lot of people gave us a chance, but if you have 23 guys who believe, a coaching and management staff that believe, a squad of players who believe and a club that really believes, you can do the unthinkable and you can make dreams come true."

Toulon's second-row Dave Attwood was left to rue his side’s inability to convert possession and territory into more points.

"They got more points than us,” Attwood said.

“We had opportunities. We had a number of opportunities but we didn't finish them off. Then we made a couple of key defensive mistakes that really cost us, cost us dearly.

"You know, the spirit here is incredibly strong. It has been for an awfully long time and that builds a lot of pressure on the other team. It doesn't take many mistakes to lose a game, particularly in the quarter-finals of the top tier of Europe.

"Unfortunately, we were on the wrong end of that day."

The second-row was impressed with the big match atmosphere in Limerick.

"Thomond Park is well known around the world as being one of the best atmospheres in rugby. It was my first appearance here, it was an exciting thing for me to be part of.

"To be honest my head was somewhere where I couldn't see what was going on. I am not entirely sure what happened there. Like I say, it doesn't take much to cost you dearly in the knock-out stages, one mistake here or there, a one point game."