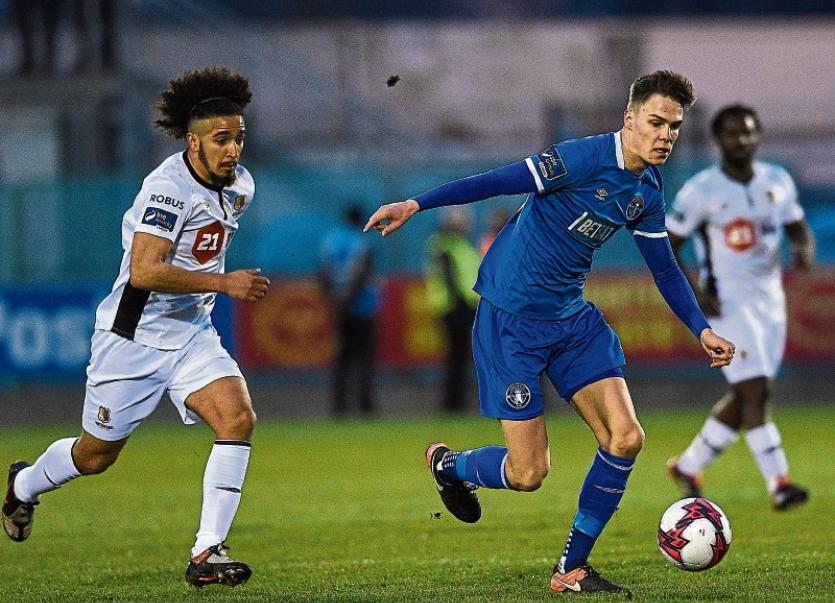 LIMERICK FC suffered their fourth defeat in five SSE Airtricity League Premier Division fixtures when going down 2-0 to high-flying Waterford FC before an official attendance of 1,122 at the Markets Field on Good Friday.

A goal in either half from Courtney Duffus and Paul Keegan, from the penalty spot, helped clinical Waterford score their first win over the Shannonsiders in six years as well as claiming the bragging rights in this Munster derby clash.

While Waterford’s new-look side appear well-placed to challenge for a top four finish this season, injury-hit Limerick have managed to take just a single point from a possible 15 in their last five league fixtures.

Limerick’s lack of cutting edge in front of goal continues to hamper Tommy Barrett’s side as the Shannonsiders have scored just four goals in nine Premier Division fixtures this term.

Home side Limerick FC had a terrific chance to take the lead on 17 minutes when Shaun Kelly played in the lively Will Fitzgerald who found himself one-on-one with keeper Vigouroux, who has joined Waterford on loan from Swindon Town. However, Fitzgerald shot straight at the Waterford netminder.

Limerick fell behind in the 23rd minute when the home side coughed up possession inside their own half and Waterford striker, former Republic of Ireland U-21 international Courtney Duffus slotted the ball past Brendan Clarke with a neat finish into the bottom right corner of the net.

Limerick might have fallen 2-0 down so after, but John Martin couldn’t avail of some lacklustre defending from the home side.

However, the next clear-cut opportunity to score fell to Limerick in the 37th minute when the Shannonsiders came within a whisker of drawing level.

On the stroke of half-time, Waterford could well have doubled their lead when former home favourite Bastien Hery set up Gavan Holohan with a delightful pass. However, Holohan saw his close range effort slide outside Clarke’s left hand upright.

After a quite start to the second half, Waterford created the first decent start of the half. John Kavanagh’s cross to the back post was knocked goalwards by Holohan, from a difficult angle and Blues keeper Clarke does well to deny him.

Waterford continued to dominate possession through the third quarter and had a decent opportunity to grab a second goal when goalscorer Duffus robbed possession 30 yards out before racing clear on goal. However, his effort was well saved by Brendan Clarke.

The hugely influential Hery created an opening down the left in the 79th minute, but Holohan’s header flashed past an upright.

Waterford did finally score the second goal their second half display deserved when Paul Keegan netted from the penalty spot in the 84th minute after substitute Ismahil Akinade was fouled inside the area.

Next up for Limerick FC is Easter Monday’s EA Sports Cup second round tie with Cobh Ramblers at the Markets Field, 5pm.