Penalty heartbreak for Limerick FC at home to Shamrock Rovers 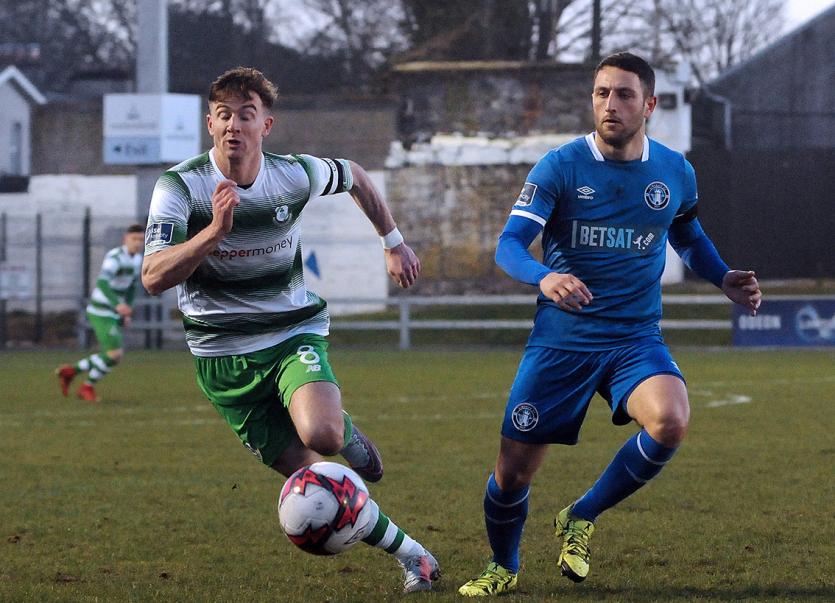 LIMERICK FC lost their unbeaten home league record this season when suffering a 1-0 defeat to Shamrock Rovers in their SSE Airtricity League Premier Division fixture at the Markets Field on Bank Holiday Monday.

Rovers’ 24-year-old striker Graham Burke netted the game’s only goal from the penalty spot in the 75th minute to silence home supporters in an official attendance of 1,348.

The visitors, who had lost each of their three previous games on the road, finished the game with 10 men after defender Sean Kavanagh was sent off in the 83rd minute.

However, Tommy Barrett’s side, who had drawn 1-1 with champions Cork City just 72 hours earlier, just couldn’t manage to find a precious equaliser that would have extended their top flight unbeaten record to four games.

Limerick’s injury-hit side had battled bravely to the point the Blues conceded the decisive goal.

Adding a degree of spice to Monday night’s game was the fact that Limerick FC manager Tommy Barrett played ten games for Shamrock Rovers during the 2007 season, while Rovers boss Stephen Bradley played for two seasons with Limerick.

Tommy Barrett made three changes to the starting line-up from the side that drew with Cork City on Friday night as Killian Brouder, Will Fitzgerald and Henry Cameron replace Darren Dennehy, Danny Morrissey and Daniel Kearns who are ruled out.

The shake-up in the starting line-up saw a first appearance of the season for Henry Cameron.

A minute later, Limerick might have hit the front when Will Fitzgerald closed down Rovers goalkeeper Tomer Chencinski as he attempted a clearance. However, an alert Roberto Lopez deflected Fitzgerald’s shot out for a corner which came to nothing.

Fitzgerald’s long throw-ins are sure to be a useful attacking weapon for Tommy Barrett’s side this season.

Rovers did create a couple of chances from free-kicks in the final 15 minutes of the half, but Graham Burke’s two efforts flew high and wide, while Sean Kavanagh’s effort from a more central position just outside the box was saved by an alert Clarke.

The sides retired to the dressing rooms 0-0.

There was no shortage of industry and endeavour at the start of the second half.

Limerick’s Killian Cantwell saw his well struck effort on 55 minutes, following a corner, flash just outside an upright, while moments later the Hoops could have taken the lead but Gary Shaw’s close range effort fell kindly for Blues ‘keeper Clarke after some impressive build-up play from the visitors.

Limerick continued to pose a threat and Connor Ellis was fouled just outside the penalty area in the 67th minute. Billy Dennehy’s free-kick was a terrific one across the six-yard box, but no home player could get the slightest of touches needed to divert the ball into the net.

A minute later the impressive Cian Coleman cut in from the right and nutmegged a defender. before firing a well-struck attempt just outside the right hand upright.

Just as Limerick began to get the sniff of keeping a cleansheet, Rovers took the lead.

Blues defender Shaun Kelly tumbled Ronan Finn inside the area and match referee Graham Kelly had no hesitation in pointing to the penalty spot.

Kelly was withdrawn soon after the replaced by Jeff McGowan who was making his league debut for the Blues.

The visitors held out for a precious victory despite losing Sean Kavanagh to a straight red card with seven minutes remaining.