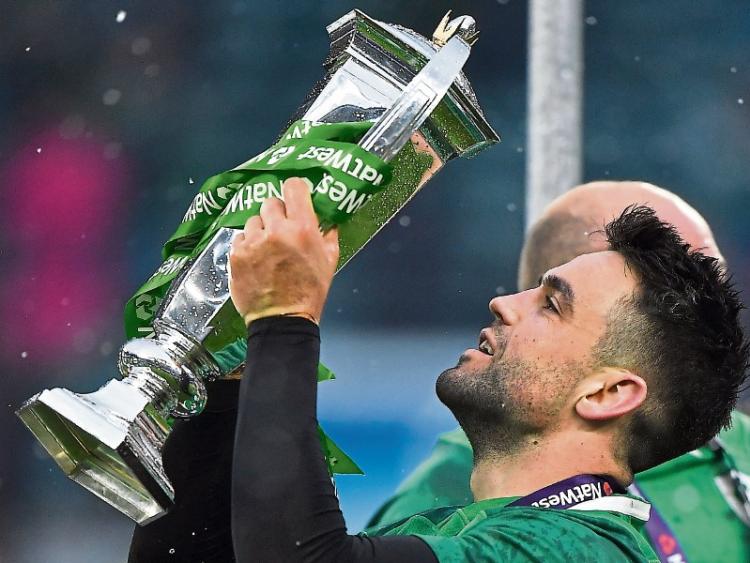 IRELAND’S Limerick and Munster contingent played starring roles as Joe Schmidt’s side roared to 6 Nations Grand Slam glory with a thumping 24-15 victory over England at Twickenham on St Patrick’s Day.

Limerick-born scrum half Conor Murray and winger Keith Earls turned in powerhouse performances as Ireland secured the Grand Slam for just the third time ever, adding to the successes of 1948  and 2009.

The hugely influential Murray landed a crucial second half penalty to ease Ireland past their old rivals.

Earls, who was again electric with ball in hand as well as making several crucial tackles, was forced off the field with an injury in the second half which is a worry for Munster with their Champions Cup quarter-final showdown with Toulon just two weeks away.

Earls did come back out onto the pitch at full-time where his two young daughters Ella May and Laurie joined him to celebrate their dad’s achievement.

Limerick-born hooker Sean Cronin once again made a significant impact off the replacements’ bench, with the Leinster player to the fore both at set-piece time and in the loose.

Cronin also made a superb try-saving tackle on England replacement Mike Brown in the final quarter bundling him into touch close to the corner flag as he looked set to score.

Munster number eight CJ Stander, who is based in Limerick, scored one of three first half tries, as Ireland became only the second side to touch down three tries against England at Twickenham in 50 years and the first since New Zealand in 2006.

Stander made an outstanding 23 carries in a teak tough encounter.

With Munster captain Peter O’Mahony turning in a powerhouse display in the back-row and in the line-out, Ireland ran out convincing winners on a famous day.