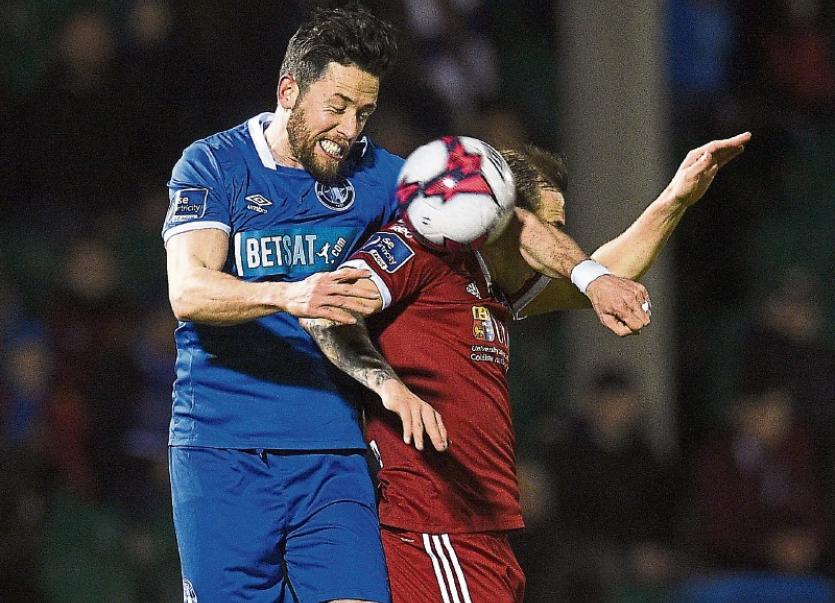 Spirited Limerick produced the perfect response in the wake of their disappointing 5-0 defeat to Derry City on Monday night when earning a fully deserved draw before an official attendance of 1,341.

Billy Dennehy had given Limerick a 17th minute lead when netting a superb individual goal from 20 yards, before Cork equalised from the penalty spot through Kieran Sadlier just after the half hour mark.

Limerick gave as good as they got against the champions for the 90 minutes, creating several more good scoring opportunities. However, it took a terrific save by Limerick goalkeeper Brendan Clarke from goalscorer Sadlier in stoppage time to ensure the home side secured a share of the spoils.

The home side’s work rate was first class all through.

Billy Dennehy, in a left-back role, sped down the wing in the ninth minute before crossing for Danny Morrissey at the back post. The former Cork City player knocked the ball down for captain Shane Duggan but his effort flew high over the crossbar.

Nine minutes later, former Cork player Dennehy put the home side in front with a stunning solo goal. Dennehy picked up the ball in the middle of the pitch and drove towards the Cork penalty area before unleashing a superb low shot into the bottom corner of the net from 20 yards.

The Markets Field was rocking.

However, the goal sparked Cork, who had won four of their five opening league games, to life and it took a superb save from Blues keeper Clarke to prevent Gearoid Morrissey from levelling the game with a terrific 25-yard effort in the 26th minute.

The champions did draw level six minutes later, however, after referee Neil Doyle awarded a penalty when Darren Dennehy was judged to have fouled striker Graham Cummins.

Kieran Sadlier duly dispatched the spot kick to the back of the net beyond Blues ‘keeper Clarke.

Cork dominated possession for the remaining 15 minutes of the half, but the sides remained tited 1-1 at the break.

Cork enjoyed the lions-share of possession through the opening 15 minutes of the second half, but a resolute Limerick side kept the visitors at bay.

And a tenacious Limerick side created two decent chances as the clock ticked towards the hour mark.

Substitute Will Fitzgerald was fouled 30 yards out after some excellent hold-up play. Billy Dennehy’s free kick fell to his brother Darren at the back post. However, he hooked the ball over the crossbar from a tight angle.

Limerick held firm in the closing minutes to record an excellent result.

Striker Mark O'Sullivan was unavailable with a broken metacarpal sustained in the defeat to Dundalk.