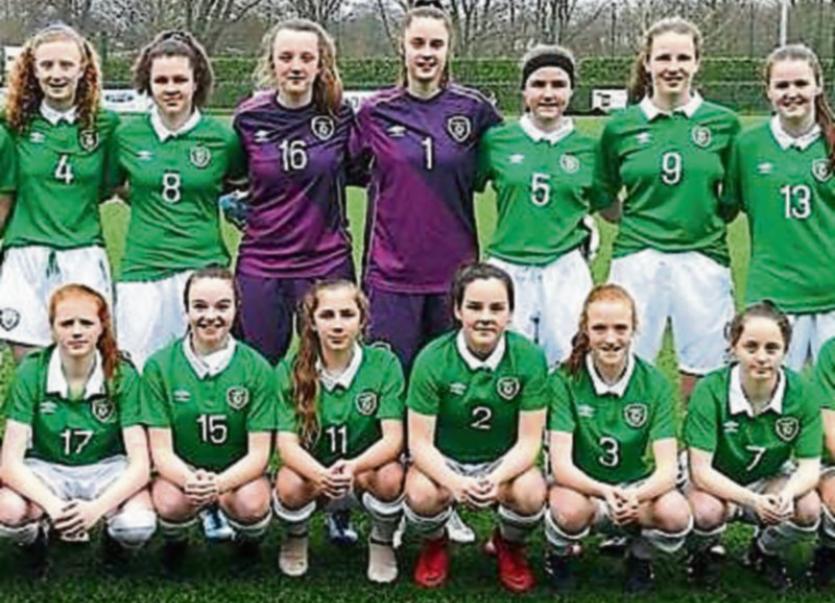 TWO Limerick teenagers made handsome contributions as the Republic of Ireland U-15 schoolgirls team retained the John Read Trophy following a comprehensive victory over hosts England in Stafford Town FC on Saturday.

The talented Aoibheann Clancy, from Kilbehenny, started in midfield for the Republic of Ireland side which defeated their English hosts 3-0. Clancy is a student at Presentation Secondary School, Thurles.

The highly rated Leah Hayes Coen, of Scoil Mhuire agus Íde, Newcastle West, was introduced as a second half substitute in the Republic of Ireland victory.

It’s two wins on the bounce for Richard Berkeley’s side as they overcame Northern Ireland 2-1 last month.

Hayes Coen was one of seven Limerick-based players included in the Munster squad for the FAI Schools U15 Girls’ Interprovincial Tournament as the AUL Complex, Clonshaugh, Dublin last November.

Newcastle West AFC player Hayes Coen was also part of the Limerick Desmond U-14 squad which competed in the Gaynor Cup at UL last summer.

The Irish were impressive from the outset in Saturday’s clash with England and produced several clear cut chances early on but it wasn’t until the half hour mark that Presentation SS, Kilkenny scholar Ellen Molloy headed home to break the deadlock.

Molloy added a second on the hour mark to give the visitors some breathing space in a physically demanding encounter.

The icing on the cake came two minutes from time when substitute Erin McLaughlin of Carndonagh CS came off the bench to convert the Republic of Ireland’s third of the day.