Martin Kiely: Give the games back to the people that matter 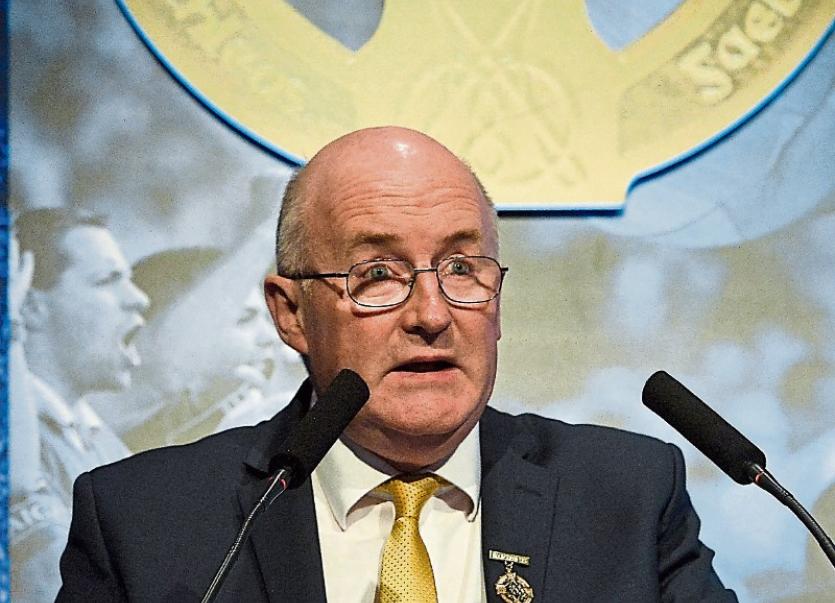 New man in: The new GAA President John Horan who has a tough task on his hands

A couple of weeks ago a new President of the GAA took office. Like many others that went before him, john Horan proclaimed the importance of the club and how he would make it the centre piece of his term as President.

Time will only tell how successful he will be but in reality those ploughing away at club level have for a long time felt very isolated.

From time to time they feel the trimmings of how great they are but deep down they know the GAA they grew up in is now far removed from the corporate structure they see in Croke Park.

It’s sad to see many great GAA communities struggling to keep it going. The same faces that worked tirelessly for generations are now tired. They have given their all. The boat, for many of them. is sinking and regardless of what life buoys are thrown from Croke Park it’s too late.

The last twenty years, from a Croke Park point of view, have been about building that corporate model. A model that has seen the games suffer while those in charge focused on sponsorship, big TV deals with Sky and the GPA. I am sure new President John Horan has good intentions but the wheel is too far advanced now. Those around him might have a club day in Croke Park for delegates and lots of spin surrounding this gig but it will in no now way unwind the direction the GAA is fixed on.

At the recent Congress the CPA (club players association) put forward a motion for more transparency around votes at annual Congress. One would expect that such transparency would be a given but not for the GAA. People in clubs have a right to know how their County Board officers voted but sadly this motion was lost before any vote was cast.

The former Wexford manager Liam Griffin spoke in favour of the motion but his words fell on deaf ears. I have known Griffin for more than twenty years. He is a man that holds great passion for the GAA and knows the importance of the club. Croke Park is now a business plain and simple. Yes they do organise games but it’s now more interested in concerts, TV deals and sponsorship. They will say the majority of monies raised goes back to clubs and County Boards. That may be so but how much more money does Croke Park need. At what point will the values of the founding fathers be followed. Those men must surely have turned in their graves over the past few years.

The GAA has been on a slippery road for many years and those guiding the organisation in Croke Park did what they wanted. Many of the people that they brought in had little knowledge of the importance of the games in rural Ireland. They had never had or appreciated what happens when you place a hurley in the hand of a young player. The magic that’s felt when ash connects with leather. That connection has inspired generations of young boys and girls but Croke Park is content on developing a model that see people pay for the privilege of watching our national games.

Those who engineered that our games should be behind paywalls like Sky have a lot to answer for. They have done the games a great disservice and only in time will the real effects be known.

Congress is organised in a way that delegates have little power. Those very same delegates have stood by and allowed the corporate wing of Croke Park control what happens now and in the future. County Boards have become voiceless or should that be that they have allowed themselves become so.

You see many of those County Boards now are depending on support from Croke Park because of the mismanagement that has taken place in many of them. It all comes back to money and this has played a key role in the way the GAA is now governed.

The former Director General Pauric Duffy had much to say about payments to managers but his own salary was kept secret. Another example of a lack of transparency.

Croke Park have failed to lead in many aspects and if it wants to see changes in other parts of the organisation then it might first show example in its own house.

There has been much talk about player welfare in recent years. The GPA have got bags of cash for talking about it. Anyone that takes a good look at the recent changes in fixtures will see that very little of it has got to do with player welfare. It’s about more games which will bring in lots more money and this will in turn bring in more sponsorship and the mountain just gets bigger. How much is enough?

When will it be about the players, the games and the people who have done so much to develop gaelic games in clubs. The games have become elite in so many ways. Development squads were started without any control and now they have got out of hand. Big money paid to guys from other counties to look after underage players. Croke Park could change this but they have stood by. County Boards could have changed this but they stood by. It is a disgrace that Limerick have gone outside the county to bring people in to be involved at underage level.

When John Horan sits down at his desk he will see that he has many files to deal with. What if any power does he have? He has knowledge of how the development squads work from his time with Dublin and if he really wants to make a difference he will act fairly quickly on this urgent matter. The game has become too professional too soon and young players have to make choices and that are clearly wrong for players and parents.

There is a great detachment between club and what happens at Croke Park. The lads in Dublin can deliver a few grants for them but that is only part of the problem. The games are struggling and many parishes will not have teams. We don’t have to go outside of Limerick to see that.

What has Limerick County Board done about hurling in West Limerick? This division produced so many great players and clubs but that seems a long time ago now. They need to find ways to bring players and parishes together and come up with a plan that helps clubs stay alive and give players an opportunity to play.

I wish John Horan well. He has a chance to make changes and be different because the last couple of Presidents didn’t leave much of a legacy. In fact they did little to help the people on the ground or the games at large. If Horan was happy at the way Liam Griffin and the CPA were treated at Congress then I don’t hold out much hope for his term. Give the games back to the people that matter and not those with corporate agenda please.

The news broke on Monday of the death of Harry Greensmyth. For decades he served the GAA and his community with pride and distinction. I first met him when I was an underage player with Caherline. He came to do a coaching session with us. He was a quiet man that had no enemies. He served his club Hospital Herberstown, the South Board and Limerick County Board. He covered gaelic games for this paper and will be remembered as a very knowledgeable man on the GAA. Harry was also involved in many books and was a great lover of local history. Harry Greensmyth won friendship easily. He was known all over Limerick as a genuine man that had the good of the GAA and his community at heart.

He was proud of his division and saw the value in what they did. He played a big part in coaching and developing young players and that’s a gift many will remember this week. Harry would fill his car to over flowing and made sure every young lad got to the games. Herberstown meant a lot to him but his heart was always with South Liberties. To his wife Christina, family, friends and his club I offer my sincere sympathy.