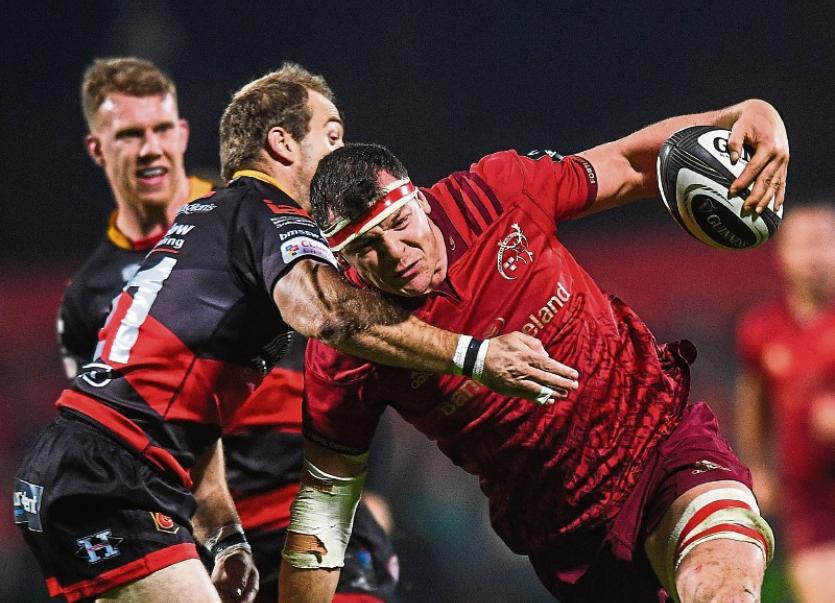 BACK-ROW forward Robin Copeland is to leave Munster at the end of this season, the province has confirmed.

Thirty-year-old Copeland has made 62 appearances, scoring 11 tries, since his debut against Treviso in September 2014.

The powerful ball carrier has been linked with a possible move to Connacht as their talismanic number eight and captain John Muldoon is set to retire from playing this summer when he will join up with Pat Lam's coaching team at Bristol.

In his time at Munster, Robin Copeland produced a man-of-the-match performance in the historic win against the Maori All Blacks in November 2016, and played an instrumental role in securing the British and Irish Cup with Munster A in 2017.

Copeland has represented the Ireland Wolfhounds against England Saxons in January 2014 and later that year played in Emerging Ireland's Nations Cup winning campaign in Romania where he was awarded Player of the Tournament.

The Wexford native went on to make his senior debut against Georgia in the Guinness Series that November.

Speaking about Copeland’s departure, Head Coach Johann van Graan said: “While it has been great to retain so many of our players this season, we respect Robin’s decision to move on.

“A physical and versatile player, we know he will continue to be successful, and everyone at Munster wishes Robin all the best for the future.”

Dave O’Callaghan, who recently returned from a long-term knee injury, has signed a one-year contract extension that will see him remain with the province until at least June 2019.

The 28-year-old, a former Academy Player of the Year, has made 78 appearances for the province and plays across the back row and second row.

Prop Brian Scott will advance to a two-year full contract from the start of the 2018-19 season. The 24-year-old has played on 19 occasions and scored his first try on his first start against Zebre at Thomond Park last month.

Tighthead prop Ciaran Parker has extended his development contract for a further year. The 22-year-old has made two appearances since making the move from Sale Sharks at the start of the season.