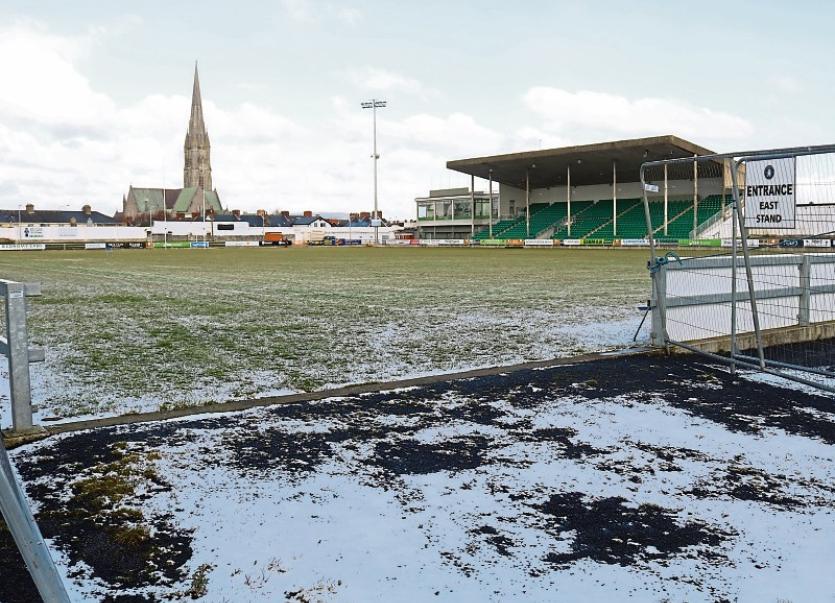 A snowy scene at the Markets Field this Wednesday afternoon

SMARTING Limerick FC will now have to wait until Friday week March 9 for their next competitive fixture, following the postponement of all SSE Airtricity League games this weekend due to the adverse weather.

Limerick had been due to face Shamrock Rovers at the Markets Field on Saturday evening.

However, the SSE Airtricity League organisers confirmed this Wednesday afternoon that, following a detailed monitoring process, where the FAI worked closely with all clubs, it was decided to postpone all games in the Premier and First Divisions ‘due to current severe weather conditions and future forecasts from Met Eireann.’

The Blues game with Shamrock Rovers has now been re-fixed for the Markets Field on Monday, March 19.

Limerick FC has confirmed that supporters who have purchased tickets online for the game should e-mail tickets@limerickfc.ie if they require a refund. Already-purchased tickets will remain valid for the refixed date.

Tommy Barrett’s Limerick side are due to host Bray Wanderers in their next Premier Division fixture on Friday, March 9 at 7.45pm.

The Airtricity League has also confirmed that two of Limerick’s top flight league fixtures in March have been rescheduled with the meeting with champions Cork City moved from St Patrick’s Day at the Markets Field to Friday, March 16.

Meanwhile, the Munster derby meeting with Waterford Utd, again at the Markets Field has been switched from Easter Saturday to Good Friday.

Tommy Barrett’s Blues were on the receiving end of an 8-0 thumping at the hands of Dundalk at a snowy Oriel Park on Tuesday night.