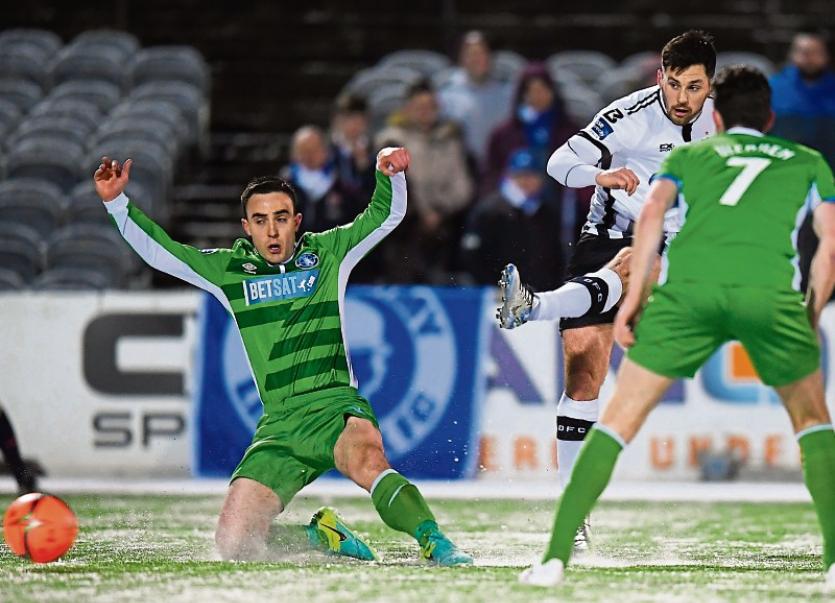 LIMERICK FC had a night to forget at a snowy Oriel Park as the Blues unbeaten start to the new SSE Airtricity League Premier Division season was well and truly ended in a 8-0 thumping on Tuesday night.

Rocked by the concession of two goals inside the opening 10 minutes to Pat Hoban and Robbie Benson, Limerick FC failed to recover and Dundalk, who had failed to score in either of their opening two fixtures, put their visitors to the sound to record an emphatic victory.

Limerick FC manager Tommy Barrett made four changes from the side that drew with Bohemians on Saturday night with Killian Cantwell, William Fitzgerald, Colm Walsh-Loghlen and Connor Ellis all coming into the starting line-up.

Hoban added his second goal and Dundalk’s third on 25 minutes to send the home supporters in an official attendance of 1,843 into raptures.

Former Limerick defender Stephen Folan headed in a fourth goal for the Co Louth side just before half time.

Stephen Kenn’s Dundalk side added four more goals in the second half from Karolis Chvedukas on 64 minutes, Michael Duffy two minutes later, Dylan Connolly in the 79th minute and a second from Duffy in stoppage time.

The game was played with an orange ball due to the snow showers which fell at the venue.

Jeff McGowan, who previously spent time with the Limerick FC U-19s before moving to Barnsley, received clearance after his signing for the Blues and was among the substitutes at Oriel Park.

Next up for Limerick, who have picked up four points from their opening three top flight fixtures, is another high profile meeting with Shamrock Rovers at the Markets Field on Saturday night, 6.30pm.