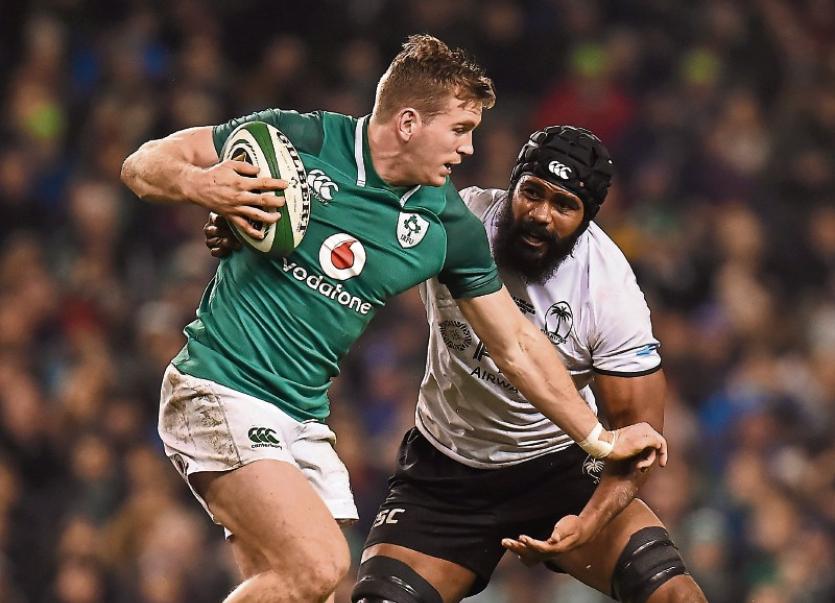 Munster centre Chris Farrell, who starts for Ireland against Wales on Saturday, pictured in action against Fiji last November

Rob Henshaw’s shoulder injury has seen Munster centre Farrell selected at outside centre. The 24-year-old made his debut against Fiji last November, while his second cap a week later was alongside Bundee Aki in midfield, who is again named at inside centre.

With Lions prop Tadhg Furlong ruled out due to injury, Ireland head coach Joe Schmidt has opted to start Leinster’s Andrew Porter at tighthead prop ahead of Munster’s John Ryan who is listed among the replacements.

Twenty two-year-old Porter comes in for his first Six Nations start in the game.

In all, five Munster players have been selected to start the game against Warren Gatland’s Welsh side.

The in-form Keith Earls is again selected on the right wing, while scrum-half Conor Murray will partner Johnny Sexton at half-back.

In the pack, two Munster forwards are selected in the back-row, Peter O’Mahony and CJ Stander.

Leinster’s Limerick-born hooker Sean Cronin is again included among the replacement for the Round 3 fixture.