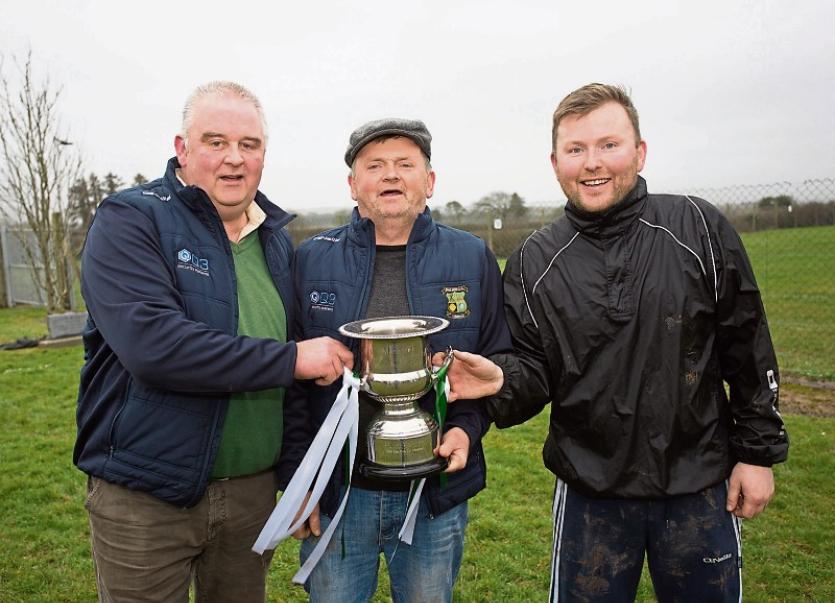 MANAGING the first Limerick club team to defeat Kerry opposition in 122 years of competitive fixtures, Mike Mann could scarcely contain his exuberance when running onto the Knockaderry pitch at the end of Ballybrown’s clash with Cromane last Sunday.

“Those bunch of lads are brilliant, brilliant…,” he gasped behind a smile that could have stretched all the way back to Clarina after the Munster Junior B Football Final.

In fact, the well-known referee wasn’t aware of the historic significance of the result.

Born out of hard work over a long season, he hailed the way his players stuck to the task as they advanced through draws and wins in the City championship, the county championship and finally the provincial competition.

“We started last June and we had only thirteen players. But we’ve come through nineteen games on the trot, six draws, four replays including two going to extra time. I’ve made more phone calls to keep them all turning up.”

A few individual performances shot to the front of Mann’s recollection of what he emphasised was huge shared effort by the entire squad.

Above all, he recognised it was the depth of the squad that enabled Ballybrown to withstand two Cromane fightbacks which would have shattered the confidence of a side with less self-belief.

“They came back at us but we brought on four or five subs and their legs carried us through. We put them in, we believed in them and they got us over the line. I’m not exaggerating but I think we used over one hundred and ten subs during the season and they all played their part.”

In his view, the senior hurling experience of most of his panel was a major factor.

“Senior hurling? Helped us big time. They’ve all been training full belt for the past two months.”

That revelation led to the most surprising aspect of the team’s preparations.

“We didn’t touch a football over that time. All hurling. But when they came out here today, they were mad for football. In fact, we’ve never trained for football. Never. We just spent half an hour on the other pitch here warming up for the match. That was it.”

But Mann was quick to point out that co-operation between the hurling and football interests of Ballybrown was key to the success. One factor was the club’s senior hurling manager Evan Loftus lining out at full-back for the footballers.

“A lot of people were slagging me I kept putting Evan on because he was manager of the senior hurling team and that’s why he was allowing me play senior hurlers. A couple of previous managers would never have allowed that. But I asked Evan two years ago when I took over and I think we’ve won nine trophies in that time. Some people may laugh at junior B but we think that’s brilliant.”

Up to junior A for the coming season, Mann is determined to give it a serious go.

“We’ll be speaking to Evan and the hurlers. We want to build on this fantastic win. And we’ve others to call on as well. Remember, we played without our best player, Alan O’Connor, who spent most of the year working in England and who was injured today.”