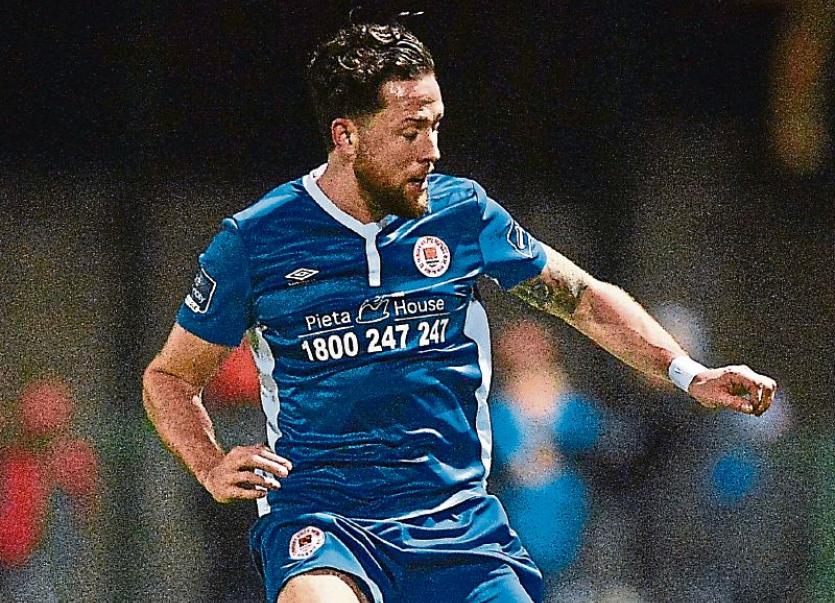 Dennehy is pictured, left, in his time at St Patrick's Athletic

BILLY Dennehy attended the funeral of one his footballing idol’s on Monday. Former Republic of Ireland international Liam Miller, who died aged just 36 after losing a battle with cancer, was laid to rest in Ovens, Co Cork this week.

Dennehy, who turns 31 this week, described Miller as one of his footballing idols growing up.

Dennehy, preparing for Saturday’s SSE Airtricity League Premier Division opener with Sligo Rovers at the Showgrounds, said he would forever cherish the memories he had of the former Ireland international.

"It is very hard to comprehend really. It's a very tragic loss of life at a young age. I knew Liam from my time at Sunderland.

“He had come in from Man United and obviously I had seen him as one of my idols growing up, so when you got to meet him and you saw he was like a normal guy and looked out for the young lads and showed them the right way to do things, it was a great time, great memories.

"I came back to Cork then from Australia and it was great to meet up again and play together there. We got beaten in the Cup final which is a big regret.

“I thought with (Colin) Healy coming back and Miller as well, we were all at Sunderland at the same time and it would have been nice to win a trophy.

"To have that year, good memories, to be out on the pitch, you create a bond and memories together. They are great to think back on.

Dennehy agreed that Miller’s death at such a young age, which numbed the football world, had brought a new sense of perspective on the game.

"I think everybody has their own life to live and everyone gets caught up in their own situations. Things might seem like a big deal, but it is not until something like this happen, when you see someone so young lose their life, it really does hammer things home that you are to enjoy every day.

"It is probably a decision I have made since I have come here (to Limerick FC) that I am going to enjoy every day, every training session, every game, go out and do your best”

A  2004 Munster minor football medal winner with Kerry, in a decorated side which also included the likes of Darren O'Sullivan, Killian Young, Brendan Kealy, Kieran O'Leary, Dennehy was brought to Sunderland by Mick McCarthy after the midfielder impressed during a trial at the Stadium of Light. He signed for the Black Cats in January 2005.

"When contracts were being offered, I had a big decision to make and when I settled on Sunderland, as soon as I signed, that was the end of the Gaelic football.

"I love Gaelic football, keep an eye on it, watch all the games, of course, being from Kerry.

"In Kerry, a lot of guys would have chosen the Gaelic football route, but soccer was a game I always loved and my parents were very supportive of whichever choice me and my brother made.

"I always like big challenges, big obstacles in life in general, I like that and it was a massive one to go away to England at 15, 16 years of age.

“I could have stayed at home and went down the Gaelic football route, but I took on that challenge and it has created a few good memories for me so far.”

Dennehy did not make a first-team appearance for Sunderland, but was a reserve and youth player at the club, and was given the squad number 34 for the 2006–07 season.

In November 2007, Dennehy made the move to Accrington Stanley on a one month deal. There, he made his first ever league appearance against Rochdale. After a further 6 appearances, Dennehy was released by Sunderland in June 2008.

In August 2008, Dennehy signed for League of Ireland side Derry City.

"Being honest, when I came home (to Ireland) I didn't really have too many choices to stay over in England. Coming home was a last roll of the dice for me in the game.

"I came home and I was very aware that I had to really make a name for myself if I wanted to make a living out of the game. I had great support from my family and I met my girlfriend Rose, who is now my wife, and I began to build a life outside of football for the first time. I felt very settled and very comfortable in Ireland.

"Once I started to play in Ireland and played for a few clubs, I had the choice to go back to England a few times since, but I said I never would, I'm very happy here. I like being able to go home when I can, like the family coming to the games, like that aspect of it.”

Dennehy has enjoyed a hugely successful career in the League of Ireland with Cork City, Shamrock Rovers, where he won two Premier League titles, and most recently St Patrick’s Athletic before joining Limerick FC in recent weeks along with his brother Darren, the 29-year-old central defender.

Dennehy said: “Personally, I felt I wouldn't be at St Pat's long before the season finished. At the start of my second season there, I knew I wouldn't be there too long, just for the simple fact of the geography.

“I was far from home and I felt like I feel better and more comfortable and settled when I am close to home.

"Limerick is a club where, to be honest, I probably regret not signing for years ago, I had the chance to come a couple of times, but for one reason or another, it just never really got done.

"Things never materialised and this time I was aware the club wanted to sign me before the manager was announced.

When (manager) Tommy (Barrett) rang me and said they would like to have me on board, it was all done very quick. I was very excited by the challenge here with all the younger players and I know what the club us trying to build and achieve.

"It will be very difficult, but it one I enjoy. It reminds me of a few clubs I have been at over the years. I think there is great potential here.”

Dennehy is pictured, left, in his time at St Patrick's Athletic