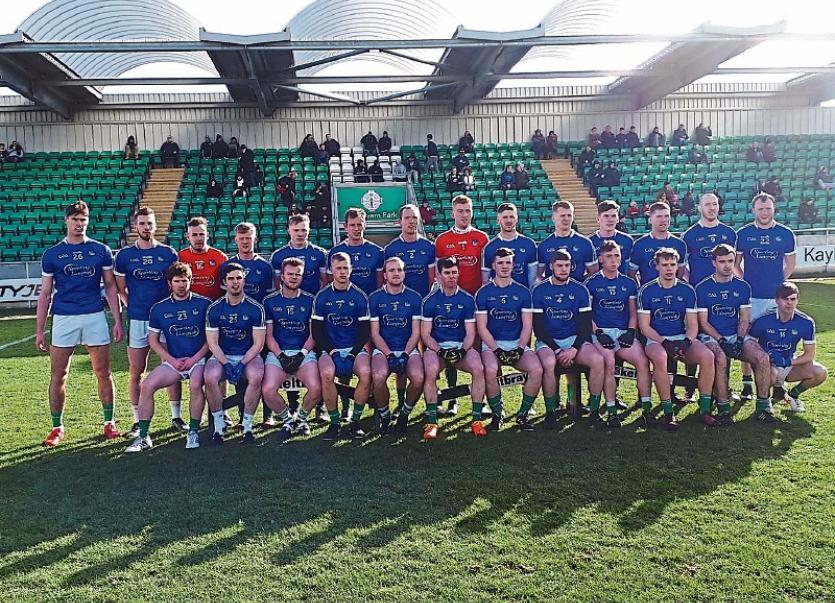 The Limerick panel that played London in Ruislip

A GOAL in the sixth minute of injury time by London ensured they finished level with Limerick in the Allianz Football League this Sunday.

In McGovern Park in Ruislip it finished Limerick and London 2-8 each in round three of Division Four.

In the end a draw was probably a fair result.

London had looked on course for a first win over Limerick since the 1999 league but then Josh Ryan scored the second of his goals in the first minute of injury time to edge Limerick clear.

But there was time for another twist and deep into the six justified minutes of injury time, Anthony McDermott scored a London goal.

Limerick, wearing blue, were 1-4 to 1-2 ahead at half time after playing with the aid of a stiff breeze.

While Limerick brought a two point lead to the half time dressing room, they did register eight wides in the 35-minute period.

It was a sluggish start from Limerick – just two Jamie Lee pointed frees to show for the opening 26-minutes.

Lee’s first came in the sixth minute but London were ahead after Fergal McMahon goaled from a penalty after 17-minutes.

With the Limerick wides mounting to six, London moved 1-1 to 0-1 ahead before Limerick found some form

The second Lee free was the first of three successive points for the visitors to London – Garrett Noonan and Danny Neville both finding the range with well taken long range efforts to level the game 0-4 to 1-1 with 30-minutes played.

London hit back but in the final minute of the half Limerick found the net.

It was third time lucky for full forward Josh Ryan. In the 10th minute he caught a David Ward delivery only for the advancing goalkeeper to block his effort. Then in the 32nd minute Ryan palmed just wide after the ball broke back into play off the crossbar.

Two minutes later he found the net – the big Oola man holding off a number of challenges to meander goalwards before finishing low to the net to put Limerick ahead for the first time.

Daniel Daly had a Limerick point inside two minutes of the restart but then London took over with four unanswered points to lead 1-6 to 1-5 as the game entered the final quarter.

A Lee free levelled and then the Newcastle West man pointed from play to move Limerick back in front.

Adrian Moyles from a free and from play then moved London back ahead, 1-8 to 1-7 with seven minutes of normal time to play.

The stopwatch ticked into injury time when Josh Ryan goaled – firing to the net after a Seamus O’Carroll drive was saved.

O’Carroll added a point and Limerick look primed for victory.

Then came the final twist and London snatched a draw and tie up the game for the fifth and final time.

Next, there is an Allianz Football League break with Limerick off to Carrick on Shannon to play Leitrim on February 25.