'I am not the best referee in the World' - Joy Neville 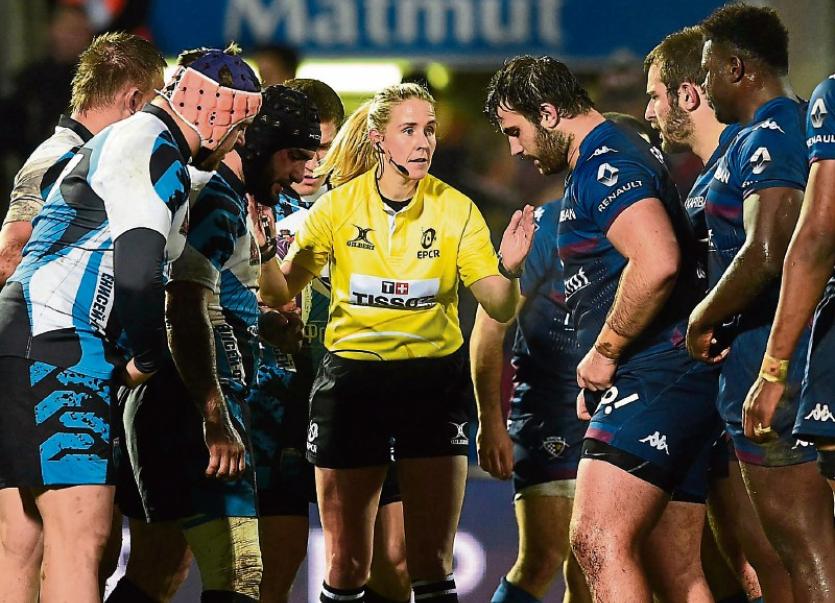 An extremely humble statement from the 2017 World Rugby Referee of the year, Limerick's Joy Neville.

The former Ireland international, turned professional rugby referee, admits that she still has a lot to learn about the game, following her break out year.

“There are many unbelievable referees in this World. That is down to their experience and knowledge. I learn an awful lot from John Lacey, George Clancy and Andy Brace. I work directly with them in Limerick on a daily basis. If anything, the reason I might be good, is that they have taught me so much. I may have gotten that award for the year that I have had, but I have so much to work on. I admire so many referees out there, including the three lads, who look after me”

Joy was speaking following her announcement as the Limerick Sports Star of the Year for 2017.

Since beginning to referee, at the request of former International referee Dave McHugh, Joy admits that she is loving it now, but there were some days when she thought about handing over her whistle.

“It was never something I had thought about. I was plagued by Dave McHugh and other local referees like Peter Fitzgibbon. I gave it a go. I did one game and hated it” admitted the former Grand Slam winner with Ireland.

“It was an U-15 game in St Munchin’s. Don’t ask me who they played. I was woeful. I remember, even at scrum time, I didn’t know the calls. The lads were like, 'Ms, are you going to call the ball in. Crouch, bind, set, or whatever'. I was so nervous I forgot about them” admits Neville with a smile.

Joy also admits to having more nerves before refereeing a game, when she started, than when she was pulling on the green jersey for Ireland.

“I was more nervous that day than before any international or anything. It took me about 9 months to a year to enjoy it. I was too critical of myself and I was too picky about my own performance. Playing at an international level, you know what a good referee was like and I wanted to be one, but I was nowhere near the level needed”

When playing as part of a team, the logistics of travel and the all round support network of a 20 person plus squad is something that Neville missed when she took on the role of referee.

“It was very hard. It was one of the main challenges I had. I remember my first sevens tournament, it was the European 7s in Russia. I found the travel so lonely. You read things about players who retire, finding it difficult to adjust to normal life. I was so used to being told where to go. What to wear. Where to be at a certain time. I was given my boarding pass, I never had to book flights. You were just looked after. Then you are just left on your own. I found that tough”

Indeed Neville, in the honest nature which saw her so successful as a player, admitted that she had wanted to give up refereeing. A fact which is hard to believe given the year she has had.

“I actually came to a moment in the 2014 World Cup. I went to support the Irish rugby team with my wife Simona. I met up with international referee Helen O’Reilly there. I told her that it wasn’t for me. I was giving it up as soon as I got home”

So how did Joy decide to stick with it? Her wife Simona played a huge part.

“The following day I got two emails about doing two female inter pro games. I was like, no, not doing them. No way.

“Simone convinced me. She told me to give it time. In the next 12 weeks, something clicked and I began to enjoy it more and more. It is like everything. Whatever you start at, you are inexperienced you make mistakes. The more you do something then, the more the enjoyment kicks in and you relax into it. I came to the stage then when mistakes became less and less and enjoyment was getting better”

The enjoyment of refereeing games is something Neville confirms comes from advice given to her when she started. Just let the game breathe.

“The game is so technical. It is all about the referee’s interpretation. The fans and players want a spectacle. If you are constantly blowing your whistle and stopping the game every two seconds, then there is not going to be an enjoyable game”

Refereeing any sport can be intimidating. Refereeing a game in a male dominated sport, for some, could be too much pressure. Not for Neville however, whose preparation for games and attention to detail appear to be her secret to success. Neville gives the example of refereeing the Women's World Cup final in Ravenhill between England and New Zealand.

“I block it all out. There was 18,000 people there and I just blocked it out. I had never seen the Haka live. I am all about preparing. I can’t blame myself or anything, if I prepare for it. I was so prepared for that final, that I looked at the protocol for the players when the Haka was over. Sometimes the players can not move, they don’t want to break eye contact or something. So I had to be prepared for getting the game started2 Neville admits.

“Likewise in the Challenge Cup game between Bordeaux Bègles and Enisei-STM, I just blocked it out. I think if you are looking at the size of the players or the atmosphere in the ground, then you might miss something at the ruck. That could lead to making a bad call. Afterwards, when you think back on an occasion, you can enjoy it then, but you are too focussed during the game for anything like that”

“For me, it is all about performance and then selection. That is my approach and it has worked well for me so far.

It doesn’t make a difference about gender, it matters about the job”