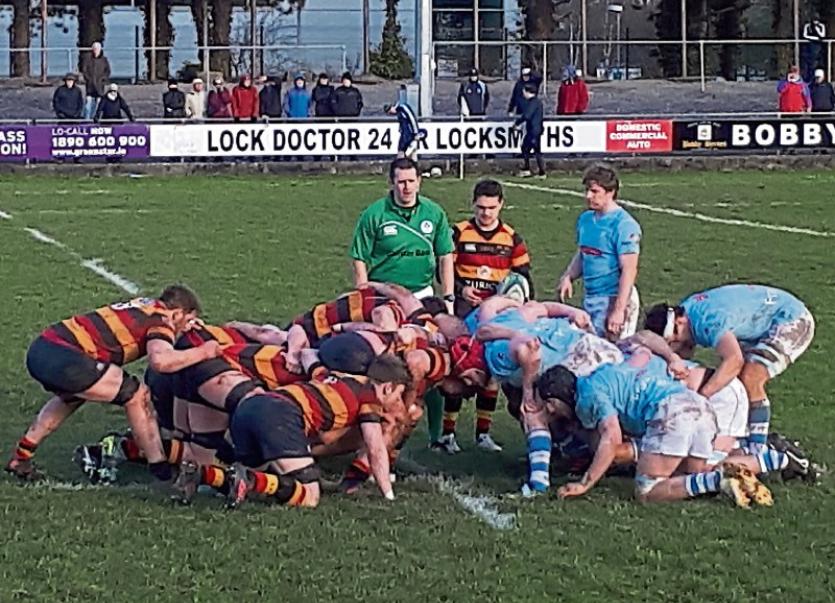 THERE were four Limerick wins and two draws in an action-packed Saturday in the Ulster Bank League.

In Division 1A, Young Munster and Garryowen both recorded excellent victories against Dublin opposition.

The Clifford Park side are now three points off the play-off places with five games to go in the regular season.

Munsters’ managed five tries, with a brace for Evan O’Gorman and one each for Jack Lyons, Daniel Walsh and Jospeh O’Connor.

Alan Tynan kicked four conversions for the Limerick side who led 14-12 at half-time.

Garryowen kept their top four play-off hopes very much alive with a gritty 24-16 victory over previously unbeaten Lansdowne at Dooradoyle.

The win has the ‘Light Blues’ sitting sixth in the top flight table, four points off the play-offs, but with a game in hand on the teams above them.

The game in hand is the rescheduled fixture with Dublin University which takes place on Saturday next at Dooradoyle.

A 16th minute try from winger James McInerney, created by a pinpoint crossfield kick from Jamie Gavin, and 11 points from the boot of scrum-half Neil Cronin helped Garryowen into a sizeable 16-3 lead on 30 minutes.

Lansdowne fought back with a try just before the break to trail 16-8 at the interval and a try and penalty had the Dubliners level, 16-16, after the hour mark.

However, Garryowen did superbly to wrestle the initiative back a penalty and try from Cronin, who bagged 19 points in all, helped Garryowen claim a deserved victory.

In Division 1B, Shannon dropped to second place in the table, two pioints off now leaders Ballynahinch, following their 15-15 draw away to Banbridge.

Shannon, who led 7-3 at half-time, had tries from Kieran Dunne and Darren Gavin, while Conor Fitzgerald kicked a penalty and conversion. Shannon looked set to record victory until the home side was awarded a penalty try deep in injury time.

To cap a positive day for Limerick sides in the top two divisions, UL-Bohemian moved out of the relegation zone in 1B thanks to an impressive 34-19 bonus point win over Old Belvedere on the 4G rugby pitch at UL.

UL-Bohs, who led 20-12 at half-time, were recording their third win on the bounce in the AIL this season.

UL-Bohs are now two points above Ballymena who occupy the relegation play-off position in the table and eight points clear of basement side Dolphin.

Meanwhile, in Division 2B, leaders Old Crescent are now the only side with a 100% record in the Ulster Bank League this season following their exciting 26-20 bonus point win away to Skerries.

The Rosbrien side who led 14-5 at half-time, managed two first half tries from Brendan Guilfoyle and Brian Tuohy.

Guilfoyle grabbed his second try after the re-start, while Larry Hanly secured the maximum five point haul for the visitors with their fourth try. Ronan McKenna added three conversions.

In Division 2C, Thomond slipped to second place in the table, one point behind table toppers Malahide after their 15-8 defeat to the new league leaders in Dublin.

Thomond, who trailed 0-5 at half-time, had a penalty goal from Evan Cusack, while Liam Brock scored a second half try for the Limerick side, off a well-placed crossfield kick from Cusack.

Also in Division 2C, Bruff sit in fifth place in the table after picking up two points in their 10-10 draw with Bangor at Kilballyowen Park.

Bruff, who led 5-3 at half-time, scored two tries through Mark Cosgrove after 15 minutes and Davy Horan in the second period.