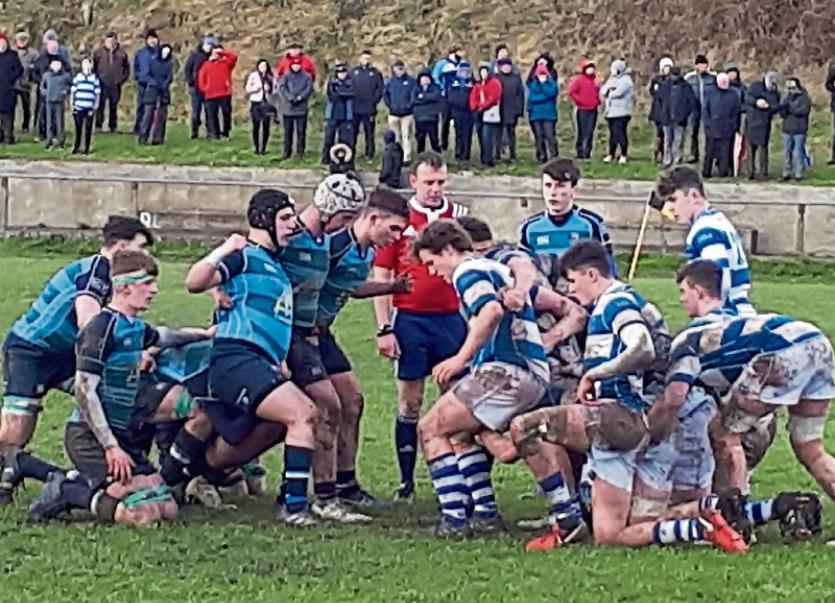 CASTLETROY College bowed out of this season’s Clayton Hotels Munster Schools Senior Cup on a 15-7 scoreline, despite producing a spirited second half comeback in their play-off fixture at a wet and windy Clanwilliam FC on Thursday.

Rockwell, who are through to a quarter-final showdown with Crescent College Comprehensive as a result of this win, laid the foundation for their success in the opening half.

Backed by a strong wind in the opening period, the Tipperary students had built a substantial 15-0 lead by half-time. Rockwell went in front on five minutes when winger Conor Pearson collected Jake Flannery’s pin-point crossfield kick to score.

Flannery added an 11th minute penalty goal, while a Dylan Flannery try, created by a fine break from full-back Ryan O’Sullivan, had Rockwell 15-0 to the good after 18 minutes once the out-half had landed the conversion.

It was tough going for Castletroy who were forced to hold onto the ball in order to make yardage, with the strong wind and blustery showers making it impossible to relieve pressure through kicking.

Castletroy’s defence held Rockwell at bay for the second quarter and the Limerick side was still well in the contest with the breeze at their backs in the second half.

While the wind wasn’t as strong after the break, Castletroy upped their workrate and intensity levels. Their resilient pack proved a match for their physically bigger opposing eight.

With half-backs of Sam Burns and Michael O’Hanrahan controlling the game effectively, pinning Rockwell back inside their own half for long spells and centre Eoin Murphy proving a constant threat with ball in hand, the Limerick students grew in confidence.

Castletroy were rewarded for their endeavour on 46 minutes when centre Joseph Johnston pounced on O’Hanrahan’s neatly placed kick in behind the Rock’ defence to score a well-executed try.

Burns landed the conversion to make it 15-7. Castletroy dominated territory and possession through the closing 20 minutes of the game. However, the Newtown students just lacked that bit of extra grunt and guile necessary to break down a physically imposing Rockwell defence.