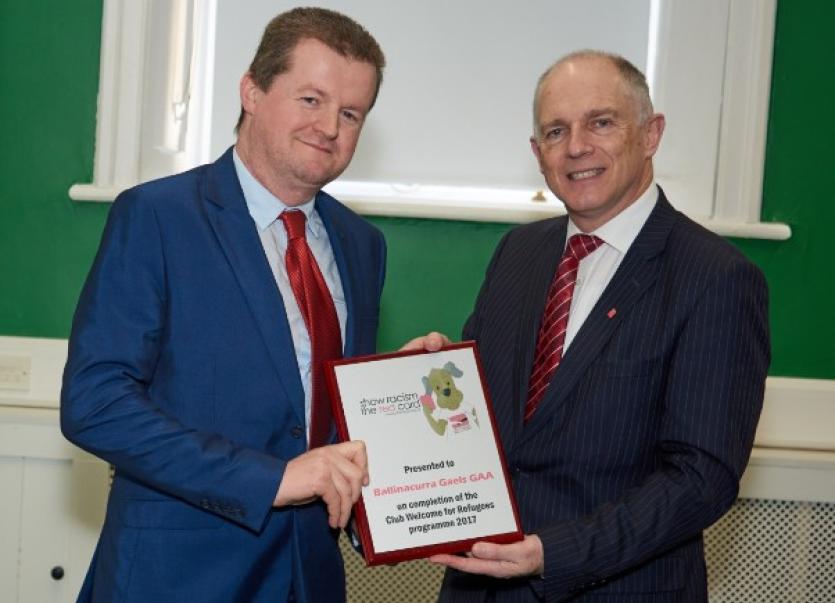 BALLINACURRA Gaels GAA Club has been recognised for their commitment to promoting the integration of refugees and asylum-seekers.

The Limerick city club was one of five GAA and football clubs to receive an award, having successfully completed the ‘Club Welcome’ programme developed by the anti-racism charity Show Racism the Red Card.

Shane Curtin from Ballinacurra Gaels was presented with the award by David Stanton TD, Minister of State for Equality, Immigration and Integration.

At the event, Show Racism the Red Card announced that ‘Club Welcome’ will be expanded this year, and called on sports clubs nationwide to register their interest in participating.

Speaking at the event, Garrett Mullan, Director of Show Racism the Red Card, said: “Sport is a powerful tool for social integration and inclusion.

"It can be an accessible and enjoyable way for migrants to connect with their new communities and begin to forge friendships and bonds.  I would like to commend Ballinacurra Gaels GAA Club and all the other clubs here today for the encouragement and support they have shown to refugees and asylum-seekers, and for making it as easy as possible for them to experience what their local clubs have to offer.

Sports clubs interested in participating in Club Welcome are being invited to apply now through the Show Racism the Red Card website, www.theredcard.ie.