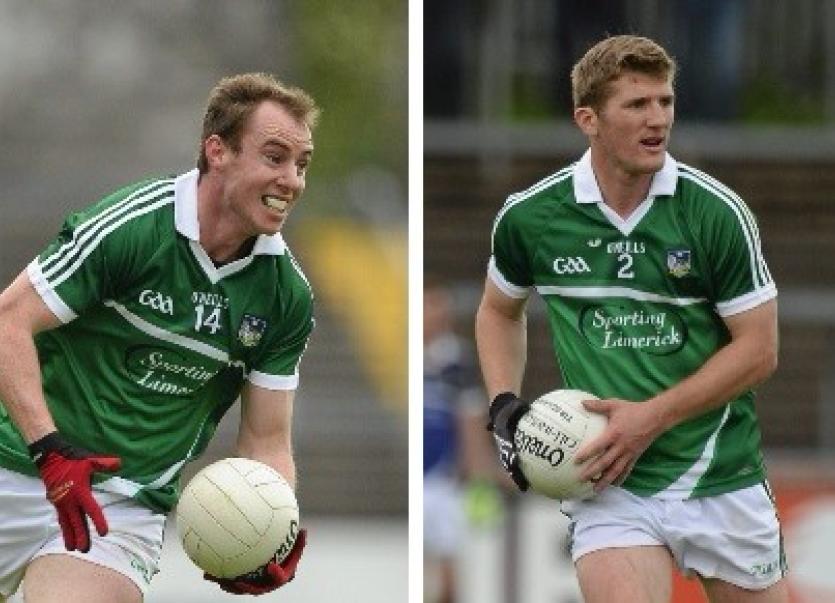 Between them the football stalwarts played over 80 times in the championship for Limerick.

St Kierans defender Johnny McCarthy departs the inter-county scene after 14 seasons in the green and white of Limerick. One of the great defenders McCarthy played 46 times for Limerick in the championship – including the 2004, 2009 and 2010 Munster SFC final defeats.

In his debut year of 2004, McCarthy played in a Division One league semi final defeat to Kerry.

Seanie Buckley joined the Limerick set-up one season after McCarthy and played for 13 seasons. He captained Limerick to two league titles in Croke Park – beating Waterford in 2010 and Offaly in 2013 Division Four finals.

Dromcollogher-Broadford’s Buckley played 40 times in the championship but carried an injury for much of last season. He returned as a substitute in the All Ireland SFC Qualifier defeat to Wexford. Playing in midfield or in attack, Buckley scored 3-20 in the championship for Limerick.

"Johnny and Seanie are two of the great players - up there with anything that has played for Limerick," said Limerick manager Billy Lee.

He added: "Both have given serious service to Limerick and would be an asset to any set-up."

"Johnny was a quite leader and I never remember him getting injured or missing a game," said Lee.

"Johnny was always given the task of picking up the top forward in the opposition and I don't think anyone ever questioned that he should be taken off someone. He would have got his place in any team in the country," said the Limerick manager.

"Seanie was a big ambassador for Limerick. Between Limerick and his club he put his whole life on hold for football. He threw the kitchen sink at it - trying to ensure he was the best he could be. He demanded that of others and always wanted team-mates to be the best they could be."

The departure of the duo and unavailability of others leaves manager Billy Lee with a very much youthful panel for 2018. A 33-man panel has been confirmed ahead of Saturday’s start of the Allianz Football League.