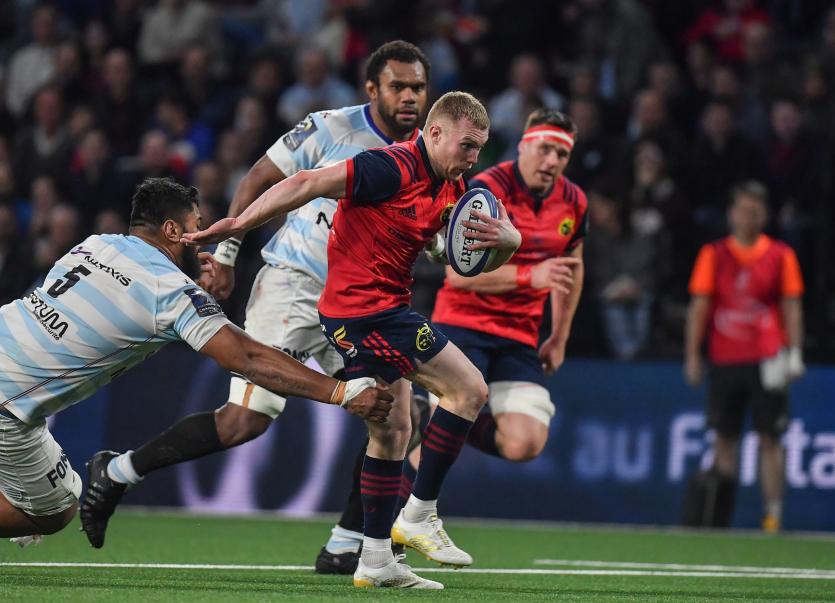 Munster Rugby took a vital losing bonus point from a 34-30 point loss at the U Arena this afternoon. Johann van Graan's men played out a fast paced, ding-dong battle with Racing 92 at the indoor arena.

This was a game that could have yielded both a bonus point win or even a bigger loss, such was the open nature of the encounter and the fact that Racing 92 went for the corner when they were 31-30 up, turning down the opportunity for a 5-0 points win in the game.

When all is said and done this evening, Munster are still stop of Group 4 on 16 points from their 5 games and very much in control of the group. A weakened and out of Europe Castres side are to come to Thomond Park next Sunday with nothing to play for, leaving Munster as firm favourites to gain another 5 points in the search for a quarter final berth. 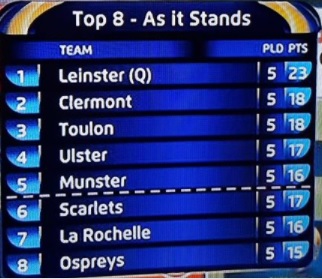 Munster could not have gotten off to a worse start as the opening score of the game came from Yannick Nyanga after just three minutes. Following two penalty advantages against Munster, backrow Nyanga crossed from just a few metres out for the French side and when Machenaud added the extras, Munster trailed 7-0

The lead was extended to 10-0 after Machenaud penalised Munster from the tee once they were adjudged to have been offside for the third time in the opening eight minutes.

Munster responded in the 20th minute as Jean Kleyn crossed for their opening score. The South Africa dived for the line, using the full length of his frame, to get his side back into the game following a shaky start. Ian Keatley added the conversion from in front of the posts to make it 10-7 half way through the opening half.

Munster did have a chance to make it level at 10-10 after 27 minutes, however Keatley's shot at goal hit the posts and rebounded out to set up a Racing 92 counter attack.

History was to repeat itself just ten minutes later as Ian Keatley hammered the same upright, again from the tee, when the chance was there to level the sides once more. Munster's disappointment of that lack of a score was added to right on the stroke of half time as Machenaud was on hand to increase his side's lead to 13-7, following a penalty against Peter O'Mahony, which was moved closer to the posts for back chat from the Munster and Ireland captain.

The second half began, exactly as the first had. Racing 92, raced (excuse the pun) into life with Marc Andreu dotting down in the very corner following multiple pick and go carries from his pack. The French side showing once more, should they raise the pace of the game they could hurt the visitors. Machenaud, thankfully for the onlooking Munster fans, missed the conversion, leaving the score 18-7 after 42 minutes.

Those aforementioned fans were out of their seats just minutes later as Keith Earls started a finished a move which saw him cross for a vital away try. The Irish wing was on hand to tidy up a poor pass from Simon Zebo, before off loading. When Conor Murray added pace to the play, Earls was on hand several phases later to cross for Munster's second try of the game. Keatley made sure of the conversion leaving the score 18-14 after 45 minutes.

The afternoon under the roof at the U Arena was to get even better when Munster's Chris Farrell crossed for his side's third try in the 53rd minute following excellent build up play, once more, from the Munster pack. Again, Keatley was on hand to convert the extra points and Munster now led 21-18.

Their lead lasted just two minutes however as Machenaud was on hand once more to penalise Munster's scrum in the 55th minute to leave this ding-dong game 21-21.

With the game now in the balance, Munster's kick game once more paid off as their field position and pressure lead to a penalty, which Keatley made no mistake with, pushing his side into a 24-21 lead as the Fields of Athenry rang out. The song was only in its last verse as Keatley once more kicked his side further into the lead, making it 27-21 after 64mins.

A pre-planned lineout move from Racing 92 in the xx minute caught Munster cold however and Dimitri Szarzewski rushed away to give Machenaud the chance to take the lead for his side with a conversion. With conditions perfect for kicking, he did just that to see the score at 28-27 to the home side after 67mins.

With  the aforementioned perfect conditions for kicking (indoors) it was Conor Murray who kicked his side into the lead after 74 minutes, from inside his own half. (Can this man do no wrong?) Murray slotted one over from his own half making it 30-28.

From the resultant kick off, Machenaud was able to score another three points for his side. Former Munster star Donnacha Ryan won a penalty for the home side and once more Machenaud was there to make it 31-30

In keeping with the ope nature of the game, Racing 92 benefited from a poor exit kick by Keatley, forcing a penalty to give them a 34-30 lead with just five minutes left on the clock. Fans in the crowd could not figure out how Racing 92 did not go for the corner and try for a bonus point win, thus pushing Munster into second spot in the group. The game ended with both sides still in the hunt for top spot, with games against sides who have nothing to play for to come in Round 6