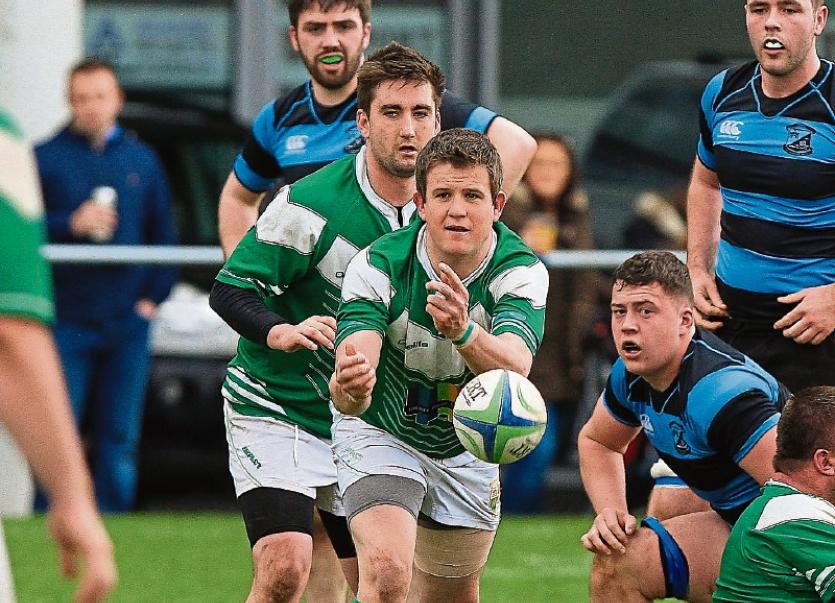 Tadhg Bennett of Richmond in action for his side this season

THERE is a varied and interesting fixture list for this weekend, with two local clubs in Bank of Ireland Munster Junior Cup action, all four competing in the Munster Junior League division one and a full list of Gleeson League games.

In the Junior Cup, Old Crescent are at home to Thurles in Rosbrien on Sunday next and they will be expected to advance in a competition that can be traced back to 1909.

Also in action will be St Mary’s, whose only Junior Cup success was in 1968 at Thomond Park. The Saints play Fermoy in Grove Island. This looks like a very interesting pairing and should attract a big attendance at the Corbally venue.

If Richmond’s performance last Sunday is an indication of their intent to win the MJL1 this season, then those in the other leading positions of this league will be concerned.

The win over Abbeyfeale was impressive and if they can follow that with an away victory over Clanwilliam this weekend, Richmond could be in a very good position going into the run-in.

Abbeyfeale host Kilfeacle and District this Sunday and that game also promises to be close. Kilfeacle are on a high after their All-Ireland Junior Cup win over Newcastle West and their form is sky high at the moment.

Struggling Galbally travel to Cork to play Cobh and they are still searching for their first win in this league, while Newcastle West, now under the coaching of former Young Munster great, Declan Edwards, host Youghal.

Garryowen look the most likely to top Section A with Shannon in close pursuit while Old Crescent have been very impressive in recent outings.

Richmond got the perfect start to the New Year at the Canal Bank venue on Sunday, beating Abbeyfeale convincingly to give their chances of being in the mix for the Munster Junior League division one title a major boost. Next Sunday they travel to play Clanwilliam.

Two local sides crashed out of the Munster Junior Cup, Buff losing away to Ennis and Thomond also suffering a defeat, going down away to Tralee.

THIS was a good result for Richmond and puts them, temporarily at least, on top of the table.

The green and whites ran in five tries, three from Jeffrey McNamara, one from Keelan Stephenson and one from Tadhg Bennett, who also kicked three conversions.

Richmond had a narrow 5-3 lead at the break, Derry O’Connor kicking the Abbeyfeale points, but the flood gates opened up for them in the second period as they ran up a further 26 points.

Abbeyfeale fought bravely to the end but tries from Stephen Cahill and Tom Hassett were not enough to take something from the game.

Next week-end St Mary’s are at home to Fermoy and Old Crescent host Thurles in the Munster Junior Cup.

In the Gleeson League at the weekend Garryowen had a 31-19 win over Richmond and St Senan’s beat Presentation in Jim Slattery Park 10-7.

Old Crescent beat Newport 36-0 in Rosbrien while St Mary’s could only muster up 13 players for their trip to Ennis and that game is to be re-arranged. In the other game locally, in the Gleeson League, UL Bohemian had a sizeable victory over Newcastle West/Abbeyfeale, running out winners on a 46-14 scoreline.

Presentation will be disappointed with this result but they certainly battled hard throughout a tight encounter. A try by Alan Daly, converted by player/coach Niall McNamara, kept them in with a shout but the Clare side just edged it at the finish.

This was a great game to watch with the light blues adding another victory in their bid to qualify for the knock-out stages of this competition.

Richmond fought hard to the finish and had tries from James Madden and Vinny Moloney with Brian O'Neill kicking two penalties and a conversion but it was not enough to get close to the Garryowen tally.

Scorers for GFC were Conor Downes, who scored a brace of tries, Mark O’Connor, Luke Guinane and Daryl Smyth a try each while that most consistent of place-kickers, Kevin McEvoy, converted all four tries as well as kicking a penalty.

On the scoresheet were Robert Walker, Sean Ryan, Simon Ryan, John Noonan and Tom Moloney a try each. Ian McNamara had his kicking boots in good shape and contributed four conversions and a penalty from the kicking tee.

A surprise result in Ennis with the home side edging out visitors Bruff.

The Limerick visitors were well beaten on their visit to Kerry and the 20 point winning margin told the story of this cup tie.