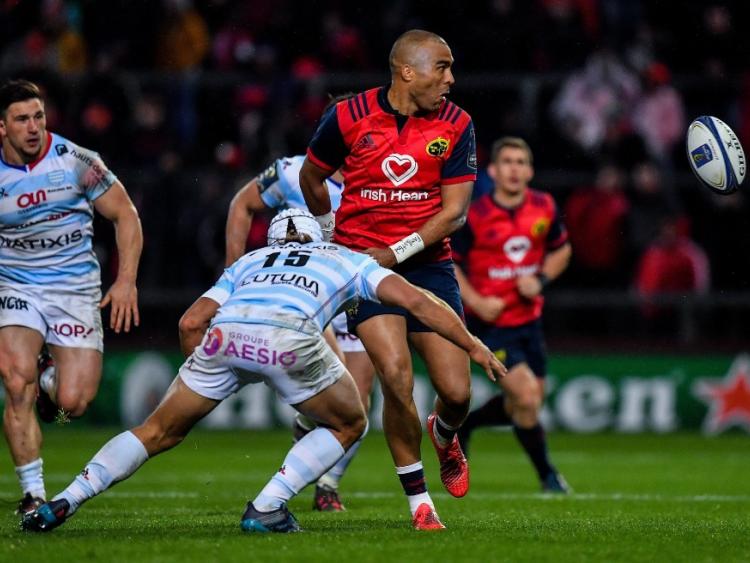 Zebo in action against Racing 92 in this season's Champions Cup

RACING 92 have this Tuesday confirmed that Munster's Simon Zebo will join them at the start of next season.

In what was a poorly kept secret, the French club, who play Munster this weekend, confirmed on their site this afternoon that the Irish international will join them at the U Arena next season.

Below is a piece from their official website (translated from French) where they have officially announced the deal:

"You will discover the U Arena, the den of your future exploits with Racing ...
I am super excited. I saw the room on TV, Teddy told me about it, it gives me a lot of desire. She is beautiful and the conditions of very fast play favor the game that I like. I look forward !

It must be odd, no, to face your next club in a game that will have nothing friendly since the loser may have a hard time qualifying for the quarterfinal?
Of course it's going to be a very, very big game. A difficult match for both teams but especially for the Munster. We will have to do the maximum, give everything we have and not make mistakes if we want to make a result. Racing is one of the best teams in Europe but hey, Munster too!

Have the fans of Munster finally accepted your decision to leave the club to join the Sky and White?
It was difficult at first but I think they understood and accepted my decision. They wished me success in this challenge that I imposed myself. The decision was very difficult to make, I had a great connection with them, with everyone at the club but it was the right moment ...

This "difficult decision", Teddy and Casey helped you take it?
Yes quite. They convinced me by telling me about life at the club, on its own side very family, the fact that we were always there for each other, whether in the team or in the club as a whole. It is important to me that aspect. I like to feel surrounded, like family and I know that in Racing it will be the case. It is also a club that has a long and long history, a tradition, like Munster, but at the same time a very ambitious club, looking to the future and focused on winning. It is the very high level, like Munster, without denying the human side. In this sense the two clubs have a lot in common. I am a very determined person, a real competitor but I also need human warmth in everyday life.

And heat in the U Arena, even in winter? Is it an advantage for you to move under a roof, with a mild temperature even in the middle of winter?
Yes I think I will love it! And then for the game, as I said, I like when conditions are very fast and that's always the case.

After the match on Saturday you plan to come back when?
Probably late January for a few days, just to visit Meudon, Sceaux, Le Plessis and the surrounding area. I will have to find a house for my family and I, a kindergarten for my son. For my daughter we still have some time! "