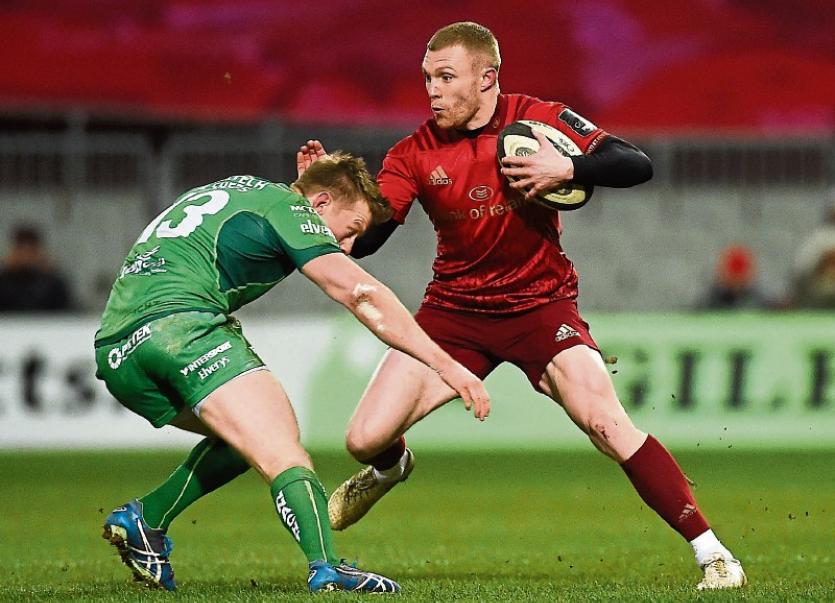 MUNSTER finally got to enjoy some late festive cheer as Johann van Graan’s side racked up five tries in a convincing 39-13 Guinness Pro14 victory over interprovincial rivals Connacht at Thomond Park on Saturday night.

Munster had not lost three in-a-row in the Pro14 since December 2015 and a hat-trick of defeats to interprovincial rivals never looked likely hear despite the home side producing a mixed bag in the opening half.

The victory in the wake of back-to-back defeats to Leinster and Ulster, is a timely one as Munster face into two crucial fixtures in the Champions Cup beginning with the away date with French Top 14 side Racing 92 on Sunday. January 14.

Munster made 10 personnel changes and two positional switches to the side that lost against Ulster in Belfast on New Year’s Day for the fixture, while Connacht head coach Kieran Keane made eight changes to the team  which lost narrowly in Dublin.

The game saw a welcome return to the red jersey from injury for hooker Mike Sherry, who had not played for the province since September of last year.

Flanker Conor Oliver, also back after injury, was awarded the Man of the Match accolade in his first start for the side this season.

Munster led 10-6 at the end of a stop-start first half, with the only try of the opening period coming from second row Darren O’Shea in the 20th minute. It was O'Shea's second ever try for Munster.

Munster’s discipline was again an issue in the opening 40, however, as the home side conceded nine penalties.

A second Munster try from opportunist winger Andrew Conway in the 53rd minute when he beat Tiernan O’Halloran to the touchdown put some daylight between the sides. Keatley’s conversion made it 20-6.

Munster took full advantage of the sin-binning of second row Quinn Roux, after the electric Keith Earls touched down made it 25-6, with scrum-half Conor Murray bagging a brace of five-pointers to bring the home side’s try haul to five.

Connacht, who had a slight edge in meetings between the two provinces, leading by four wins to three in fixtures since 2015, before kick-off, earned a late consolation try through hooker Tom McCartney.