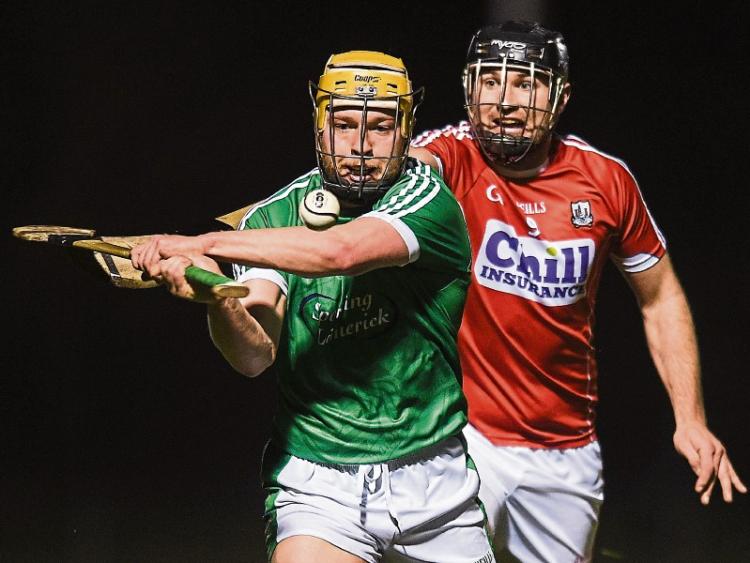 Paul Browne in action for Limerick versus Cork

Hurling on the second last day of December in normal circumstances would be far from appealing but you could see from supporters that it provided the ideal get away from Christmas.

The game was in Mallow and the chill of winter was very much in the air. Almost 1,400 supporters turned up to see Limericks opening game with Cork in the Munster league.

As a game, it offered the same sort of stuff you would see from a challenge game. The hurling was open and the challenges were few but it got the ball rolling for the year ahead. These games will offer little insight into how things will be come championship time but from a Limerick point of view all games before then will be about finding the right formation.

Cork didn’t play any of the team that lost the All Ireland semi final last year, whereas Limerick could well have had ten players that will line out in the championship later this year.

From that alone Limerick had a fair advantage going into this game. The most important thing for most supporters in 2018 is that they see signs that Limerick are going in the right direction. They need to see development in how the team play and a return to the cutting edge that Limerick always had.

It might well have been the opening game of the year but it was clear to me that even at this stage a couple of players that have been around for the last couple of years are struggling to make an impression at senior level.

This was a game that offered those players an opportunity to stand out. Sadly they failed again, they just seem unable to find the gears required to operate at this level.

The majority of players now have are well experienced and have done a lot of hurling. They have been well schooled at minor and U21. The average age has been dropping at senior level now for a while and at some stage lads will have to stand up.

There is an opportunity for Limerick to drive on this year. The round robin games should be of great assistance to them. A young team they are, but that line will only last so long. The time to make a impression is now.

Of the two management teams I would think that Cork would have been very happy with the way this under strength side played.

From last year's campaign they found Darragh Fitzgibbon and Colm Spillane. Those players enjoyed a great year and although young, they left their mark on the championship of 2017. They proved they were good enough and in this regard I would be hoping to see a few Limerick lads step up to the mark in 2018.

Given the team Limerick had, they should have won this game by a great deal more.

They started well and led 1-9 to 0-6 with a little over twenty minutes gone. The goal was scored by Aaron Gillane who finished the evening with 1-9 to his credit.

Gillane had a great year with college and Limerick in 2017 and I like the way this lad is progressing. He has a fair bit of craft and is good to make space for himself. He has a good eye for a score and is good to win his own ball. A direct ball to him will reap reward. This second string Cork outfit showed themselves to be gritty. They troubled Limerick for long stages and finished the first half strongly and were only four points adrift.

One of the frustrating aspects of Limerick hurling over the past few years now has been the short passing game. It looks great when it works but when the heat is at its greatest it so often fails.

Look at any team that has won the All Ireland title in recent years and you will see that they let the ball do the talking. With the exception of Clare in 2013 the others played direct and depend on the forwards to win their own ball.

We saw some poor passages of hurling from Limerick and it took them all they could do to get the better of Cork in the finish. At one stage we saw a Limerick player win a ball on the wing 45 meters out. He hit it to the opposite wing and the receiving player hit it back to the 65 meter line at the opposite end of the field. That player then shot it wide.

I fully understand this was the opening game of the year. Limerick need to change the mentality of needing to short pass every time or they will find it hard to make progress.

Cork drew level twenty three minutes into the second half when Jack O’Connor goaled and that left it 1-18 each. Limerick saw it out and a fine goal by Seamus Flanagan was the telling score.

Flanagan did well for his maiden voyage. This lad has a steel in him. Anyone that saw his father hurling would know where it came from. John Flanagan was not flamboyant but he was really honest, a player that always hurled with heart and passion.

Every team will be under pressure this year and it will be interesting to see their attitude to the league. I would expect the opening games to be very well contested and once teams become safe from a status point of view I think they will use it to blood players. The championship is coming just a couple of weeks after the league and for that reason some of the bigger teams might well have their priorities some place else.

Games in Division 1 of the league will be ferocious and the big winners could be Galway who will be able to coast in Division 1B. I expect to see Michael Donoghue use a lot of new players in the opening rounds of the league.

Limerick are back in action this weekend. They face Kerry on Sunday but they also play UL Fitzgibbon Cup team on Saturday in a challenge.

That will be interesting given that Limerick have a lot of players involved at colleges level. Very few of them have trained with UL so this is an important game for UL who are this year managed by Gary Kirby.

Colleges hurling is going to be under pressure going forward and unless they change the time frame this great competition that has provided a foundation for many players could be in trouble.

The small village of Pallaskenry is in mourning this week at the tragic loss of Willie Lynch. T

his rural village has come to a standstill as parishioners come to terms with such sadness. Willie Lynch was a friend to many. Sport was a major part of his life. He was a talented hurler that moved to Pallaskenry from Ballybrown as a young lad.

The club did a lot of work during those times and they quickly saw the skills that Willie had to offer. He played with Limerick at U14 and U15. He had so much more to offer. Willie Lynch had natural talent. The kind of stuff that’s difficult to coach.

He loved all sports and through it he made many friends. To his family and friends I offer my sincere sympathy.