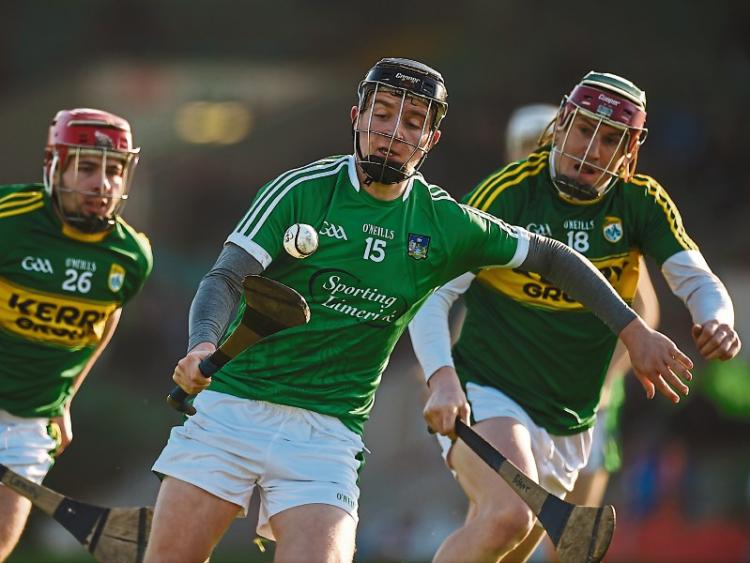 Peter Casey made his debut against Kerry last year

THE Limerick senior hurlers will play round two of the Co-Op Superstores Munster Hurling League when Kerry come to the Gaelic Grounds this Sunday afternoon (2.00).

"We are going to mix it up a bit," said Limerick manager John Kiely ahead of the Kingdom test.

In nine years of the early season provincial competition Kerry have just two wins – both over IT Tralee.

After last Saturday’s five point win over Cork in round one, another Limerick win will put the men in green on course to reach a fourth successive final.

The group stages of the Munster Hurling League are set to be concluded on Sunday January 14 when Clare come to the Gaelic Grounds – the Shannonside rivals could even be confirmed as a final pairing if both are victorious this weekend.

”We have Kerry on Sunday and Clare the following week - we have no set ambition we are just seeing who are fit,” explained the Limerick manager.

”Kyle Hayes will be out for two to three weeks, Gearoid Hegarty has a swollen ankle, Graeme Mulcahy will be out for maybe three weeks with a groin strain, Richie McCarthy is in Australia traveling until mid-January,” updated Kiely.

“This time of the year we will have fellas in and out.”

Limerick used 20 players in the Mallow win over Cork and against Kerry others will be set for debuts.

This time last year, Limerick had 24-points to spare over Kerry in the Munster Hurling League in a game that saw Peter Casey make his debut.

Last weekend Kerry lost to Clare in their opening Munster League game by 20-points in a game that was switched, just hours before throw-in, to the LIT GAA grounds in Moylish from Sixmilebridge.

Limerick confirmed a 38-man panel for 2018 in mid-November but manager John Kiely has confirmed that the 10 Na Piarsaigh players won’t be lining out in green until they exit the All Ireland club SHC – either February 10 or March 17.

“They won’t be with us at all until they are finished, that’s the arrangement we have with them,” said the Limerick manager.

”February won’t be long coming around for them and they have plenty work to do in January. Slaughtneil can’t be taken lightly - they are a phenomenal club and Na Piarsaigh have to get themselves right,” said Kiely.